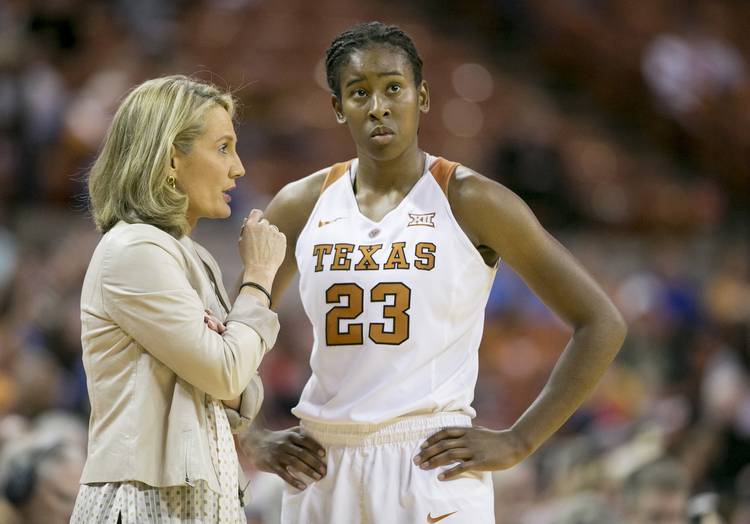 Earlier this week, the Women’s National Basketball Association and its players association reached an agreement on a new collective bargaining agreement.

Under the new collective bargaining agreement, salaries will increase and the top players can earn $215,000 each season. Improved travel arrangements — such as better seating in airplanes and individual hotel rooms — were additional points of emphasis. Sports Illustrated reported that the eight-season deal calls for paid maternity leave, a childcare stipend and a domestic violence policy.

While meeting with the media on Friday to preview this Sunday’s game at Kansas State, Texas coach Karen Aston was asked to discuss her feelings about the news. Said Aston:

As a female, we’re way behind so ‘enough’ is a hard word for me to use, but I think it’s a giant step in the right direction. In particular, just that we’re aiding women in areas that it wasn’t even acknowledged. You talk about maternity leave and childcare at your workplace and those types of things that have not existed, staying in your own room. It’s hard to fathom that those things did not exist.

I’m really happy that their salary is being increased, but I think if you talk to them, they probably are very pleased about those other areas that weren’t addressed at all and they felt maybe disrespected. I think it is a huge step in the right direction. Is it enough? No. But it is a really big step.

I want to say from all of us that are in women’s basketball, I think we just need to express how much appreciation we have for those players that fought for it. When you look at the body of work, as far as the committee and the players that were involved in that, those are players that may not play in the WNBA much longer. They didn’t necessarily do it for themselves. I think that’s what’s so remarkable is that they used their education as power. You talk about Nneka Ogwumike, who took her education seriously, Sue Bird, and if you go down the line of those that fought for this, they are educated women that know exactly how to fight for equality and they’re educated in what they’re talking about. They did this for the future, they did not do this for themselves. It just needs to be said how much we appreciate them.”

This past season, Texas had three representatives in the WNBA. Former UT guard Ariel Atkins started for the Washington Mystics’ championship team.