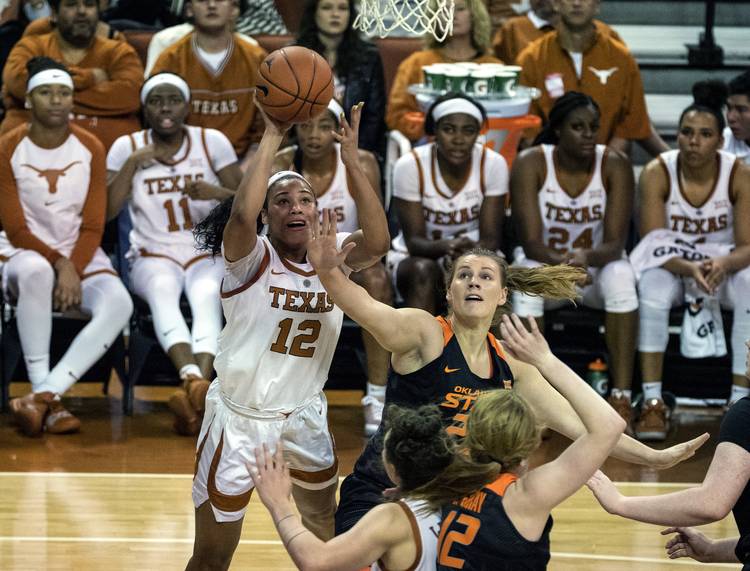 Texas guard Jada Underwood (12) gets a shot off over Oklahoma State's Abbie Winchester (25) on Jan. 2, 2019 in Austin. [Rodolfo Gonzalez for STATESMAN]

About the Longhorns: With a 85-77 victory over Kansas on Wednesday, Texas became the sixth school to record 1,100 all-time wins. … Only one Big 12 team (Oklahoma) has committed more turnovers than Texas this season. Two of UT’s five 20-turnover games have occurred over its last two outings. … Sutton needs 11 points to become the 46th Longhorn to score 1,000 career points. She has put up at least 10 points in all but one of her conference games. … In Big 12 play, the Longhorns are 2-1 on the road. The three games have been decided by an average of 6.3 points.

About the Cowgirls: Oklahoma State has been beaten 10 straight times in this series with Texas. … The Cowgirls are coming off a two-point upset win at No. 25 West Virginia on Wednesday. … Gray ranks second nationally in attempted field goals (337) but is shooting just 37.4%. … Junior forward Natasha Mack, who was limited to three minutes over Oklahoma State’s last two games, has compiled 12 double-doubles this season. Only two players in the NCAA have more double-double performances.