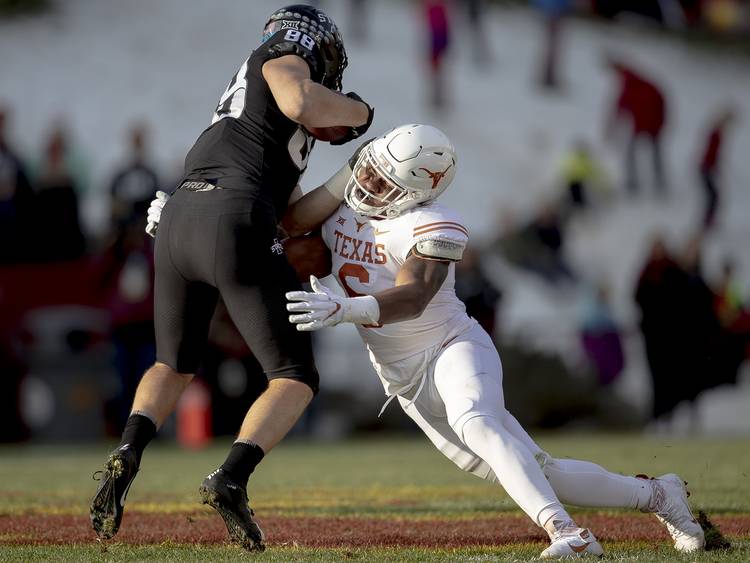 Coming off a sophomore season in which he started five times, linebacker Juwan Mitchell has reportedly placed his name in the NCAA’s transfer portal.

On Wednesday, multiple media outlets reported on Mitchell’s impending departure. Texas had not commented on the reports as of Wednesday afternoon.

A three-star prospect from Butler Community College, Mitchell was a late addition to Texas’ 2019 recruiting class. He went onto record 39 tackles and four pass breakups in 11 games this fall. Mitchell ended the season with three sacks, and he was the Longhorns’ leader in that statistical category ahead of the Alamo Bowl.

Mitchell’s time at Texas, though, ended with a thud. He sat out a loss to Baylor with a hamstring injury and did not start in UT’s final two games. Following a win over Texas Tech in UT’s finale at Royal-Memorial Stadium, Mitchell was spotted leaving the field before the playing of the Eyes of Texas.

The loss of Mitchell leaves Texas with seven scholarship linebackers on its roster. But rising sophomore Ayodele Adeoye will miss the program’s spring practices with a foot injury, and Marcus Tillman, Jr., is four months removed from the MCL sprain that ended his freshman year. Texas will soon add four-star prospect Prince Dorbah and three-star recruit Jaylan Ford to its depth chart, but neither of those 2020 signees enrolled early.

Longhorn Confidential: Looking ahead and way ahead at Texas’ recruiting plans