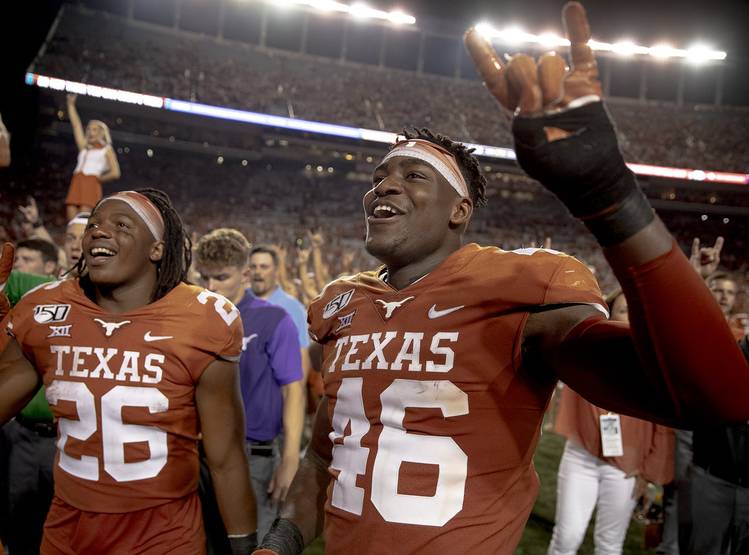 Texas linebacker Joseph Ossai (46) smiles while swinging the playing of "The Eyes of Texas" after Texas defeated Louisiana Tech 45-14 in an NCAA college football game on Saturday, Aug. 31, 2019, in Austin, Texas. [NICK WAGNER/AMERICAN-STATESMAN]

The specifics of the spring game were unveiled as part of Del Conte’s second annual Texas Athletics Town Hall event at the LBJ Library.

Del Conte went over various aspects of the south end zone expansion project and showed how the area is under full construction.

“The video board will be coming back, but it won’t be there for the spring game,” Del Conte said.

As for other stadium changes, Del Conte said the Longhorns will take the field coming out of the north end zone in 2020 because of construction. The visitors will run onto the field from the southwest corner.

The Texas football team has temporarily moved into the visitors locker room under the west stands while crews renovate the Moncrief-Neuhaus Athletic Center. Even the football coaching staff has been displaced, moving into the marketing areas on the north side of Royal-Memorial Stadium.

Del Conte also gave a major hint of a big change coming to the stadium lights.

Alabama officials installed a new LED light system in its football stadium last year, allowing for the quick change of light colors. This has become a new trend in NFL stadiums, too.

Asked by a fan about the light changes, Del Conte said, “Why are you stealing my thunder? Take a seat, be ready for next year.”