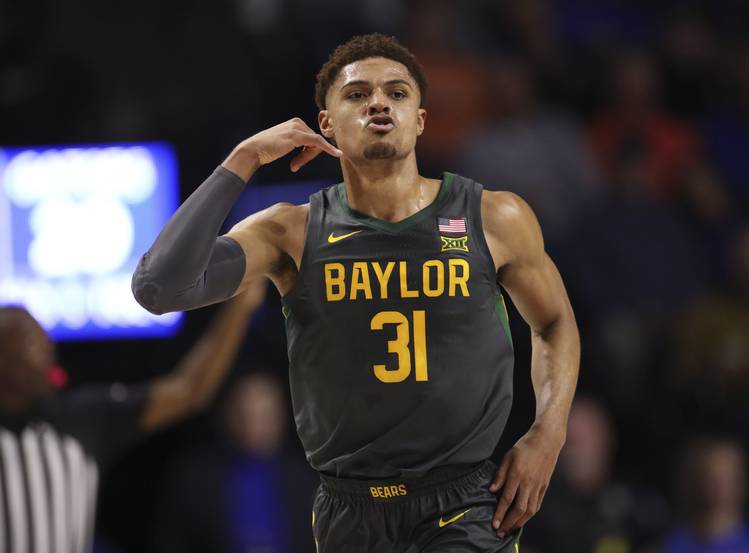 Baylor guard MaCio Teague (31) celebrates after making a three against Florida during the first half of an NCAA college basketball game Saturday, Jan. 25, 2020, in Gainesville, Fla. (AP Photo/Matt Stamey)

About the series: Texas leads the all-time series 163-92. Baylor captured the first matchup in first half of Big 12 play 59-44. The Bears were plus-13 on the glass and scored 21 second-chance points. The Horns are 1-8 in the last nine games in this series.

About the Longhorns: School officials had no injury updates Sunday about G Jase Febres (left knee) and F Kai Jones (left ankle). Both were injured in the second half Saturday against Texas Tech. It’s unlikely either player will be cleared to play Monday. Texas doesn’t play again until next Saturday at Iowa State. One overlooked notable from Saturday was that Coleman became the 38th player in school history to score 1,000 career points. He has 1,006 points in 96 career games with the Horns. Asked about Texas’ inconsistency, Coleman said, “Defensively, we gave up 19 points in the first half and gave up 43 in the second half. Just not raising our level to meet our competitors activity and they raised their level, so we have to raise ours even more.”

About the Bears: Unlike other teams this season, Drew’s club has no problem playing with the No. 1 ranking. The Bears take a school-record 20-game winning streak into Monday’s matchup. It’s also tied for second among the longest winning streaks of any Big 12 team (Kansas, 22 games in 1997; Kansas 20 games in 2008). Baylor did make it interesting Saturday against Oklahoma State. Teague had a season-high 24 points, but the Bears still had to make eight free throws in the last 14 seconds to close out a 78-70 win. “It was a tough game but it will prepare us for the physical Texas team and again, down the stretch, physicality increases. It’s something we can expect,” Gillespie told reporters afterward. Baylor is predicted to win seven of its final eight games of the regular season by Kenpom.com.