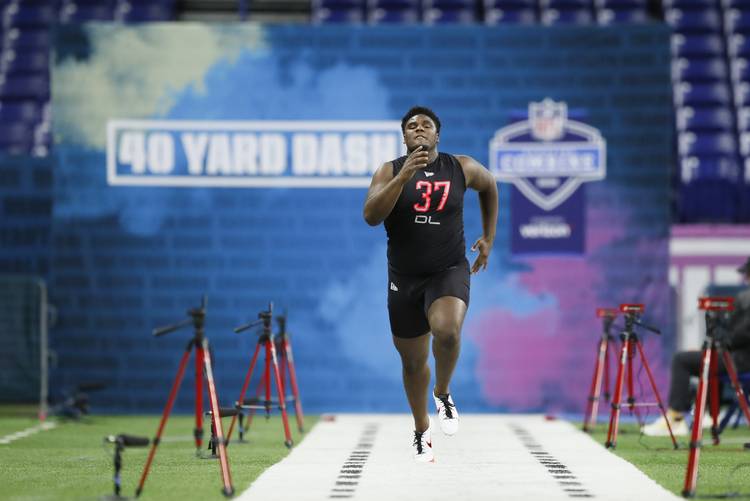 With their eyes on a career in football, four Longhorns recently attempted to stand out at the 2020 NFL Combine.

Receivers Collin Johnson and Devin Duvernay, defensive lineman Malcolm Roach and safety Brandon Jones were all invited to the annual event, which wrapped up on Sunday. While in Indianapolis, workouts, official measurements and position drills were on the invitees’ agendas. Interviews with both the media and interested teams were also conducted.

Listed below is a look at how the Texas Exes performed in some of their individual drills. Texas has scheduled its pro day for April 1. The NFL’s three-day draft will begin on April 23.

Johnson and Duvernay both rank among the Longhorns’ all-time leaders in receptions, receiving yards and touchdown catches. Johnson was either the leading or second-leading receiver in each of Texas’ past three seasons. Duvernay’s 106 catches in 2019 were the second-best effort in school history.

Linked together in UT’s history, Johnson and Duvernay had different results in Indianapolis. Duvernay’s time in the 40-yard dash was bested by only four of his fellow receivers. Johnson had a good showing on the bench press, but he sat out many drills because of a hip flexor injury.

In early February, Bleacher Report draft analyst Matt Miller sent Johnson to the New York Giants in the third round of a mock draft (98th overall pick). Miller projected that Duvernay would be available when Minnesota selects in the fourth round (129th overall).

Roach played multiple positions at Texas but he worked out with the defensive linemen at the combine. Among the linemen, Roach recorded a top-15 time in the 40-yard dash. And since defensive linemen aren’t often asked to sprint 40 yards on plays, Texas director of recruiting Bryan Carrington pointed out on Twitter that Roach’s 10-yard split was comparable to some of the NFL’s biggest names.

At the combine, Roach struggled in the bench press. He put up average numbers in the vertical and broad jumps.

Roach was not among the 256 predictions in Miller’s mock draft. As a senior, Roach had 40 tackles and three sacks.

Due to the labrum surgery he had after the season, Jones opted out of drills at the combine. Jones, however, still attempted to make an impression.

Miller reported that during Jones’ recovery, he watched every defensive snap from 2019 for all 32 franchises. He then planned to hand out notebooks for any team that requested an interview in Indianapolis.

Jones was the first Longhorn selected in Miller’s mock draft. Miller predicted that Jones would be selected by Buffalo with the 86th pick. As a senior, Jones compiled 86 tackles, two interceptions and a forced fumble. He started as both a safety and nickel back.