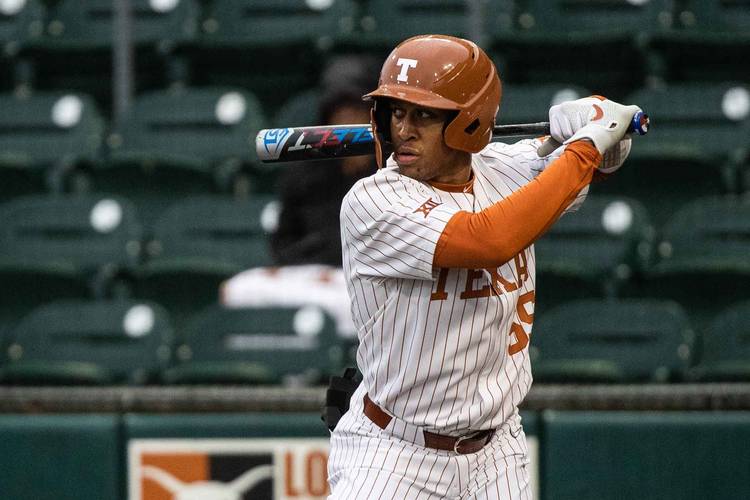 Texas coach David Pierce has announced that his baseball team will be missing its starting third baseman for the next three to four weeks.

Pierce said in a radio interview on Wednesday that junior Cam Williams needs to have surgery on his hamate bone. Williams injured his hand during this past weekend’s sweep of Cal State Fullerton. A transfer from San Jacinto College and 11-time starter for the Longhorns, the switch-hitting Williams is batting .250 with a walk-off homer against Boise State.

Candidates to replace Williams are junior Murphy Stehly and freshman Andre Duplantier II. Stehly has gotten reps at second and third base this season. Duplantier was once the favorite to win the job at third base, but he also had a hamate bone injury and that limited his availability at the beginning of the season.

While Duplantier was unable to hit when the season got underway, Texas still used him as a pitcher. The right-hander currently leads the Longhorns with his three saves. He has recorded 13 strikeouts over nine innings.

Just last week, Pierce was asked if Texas had considered asking Duplantier to just focus on pitching since Williams and Stehly had proven to be capable options at third base. Pierce replied that the book had not been closed on Duplantier being used as a two-way player in 2020.

“That’s a tough one because he has been so valuable (in the bullpen),” Pierce said. “We feel like it’s worth still exploring.”

With Williams ailing a few days later, Duplantier made his first start at third base in Sunday’s 8-4 beating of Fullerton. He went 0-for-4 at the plate and recorded a defensive assist. In the ninth inning, Duplantier moved to the mound and retired the three batters he faced.

Texas (13-3) will host Abilene Christian (7-7) on Wednesday night. The first-ever meeting between the Longhorns and Wildcats will get started at 6:30 p.m.