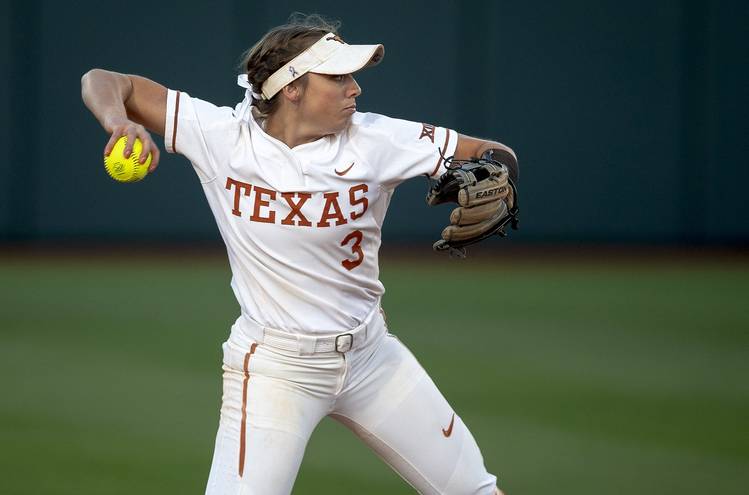 Texas infielder Kaitlyn Slack (3) sets to throw to first base for an out against Oklahoma on April 18, 2019 in Austin. [NICK WAGNER/AMERICAN-STATESMAN]

On Thursday, Slack announced that this spring will count as her senior season. Slack was the starting shortstop for a 24-3 Texas team that was ranked third in the NFCA poll. The rest of UT’s season was cancelled last week due to fears over the coronavirus outbreak.

A NCAA committee recently suggested that athletes regain the eligibility that was lost this spring. No formal plans have been publicized, however, and it doesn’t appear that Slack will take the NCAA up on whatever it offers.

By far the hardest decision I have ever had to make. Choosing to walk away from a game that has made me who I am. Thank you to everyone who has supported me throughout the years. Thank you Texas for giving me life long friendships. Hook ‘Em forever 🤘🏼

The daughter of a softball coach, Slack chose Texas over Alabama and Houston. The Liberty native then became a 139-time starter and consistent defensive presence for the Longhorns. As a senior, Slack was hitting .324 with a key homer in a 3-2 win over Utah on Feb. 14. Two years ago, Slack’s RBI single was the difference in a regional upending of Minnesota.

Slack, who is studying marketing, is one of six seniors on Texas’ roster. Classmate Miranda Elish has already said that she will pitch at Texas in 2021 if the NCAA allows it. The plans for outfielders Kaitlyn Washington, Reagan Hathaway and Tuesday DerMargosian and utility player Shannon Rhodes have not yet been revealed.