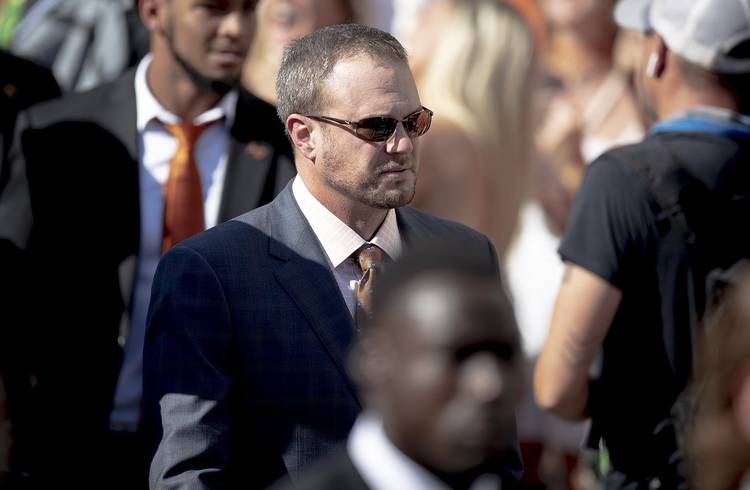 Texas head coach Tom Herman walks through Bevo Boulevard as fans welcome the team to the stadium before an NCAA football game on Saturday, Sept. 7, 2019, in Austin, Texas. [NICK WAGNER/AMERICAN-STATESMAN]

Texas coach Tom Herman posted a message on social media Wednesday encouraging people to “join us in helping our most vulnerable fellow Texans by sharing our time and resources.”

Herman, who has already given a personal donation to the Central Texas Food Bank, highlighted multiple non-profit organizations on Twitter.

“During these unprecedented times, many of our fellow Texans are suddenly losing their jobs and are struggling to pay bills and feed their families,” Herman wrote. “The needs are real and urgent. Our hearts go out to them, and the Herman family encourages all of those who can to join us in helping our most vulnerable fellow Texans by sharing our time and resources.

“Central Texas Food Bank, the Front Steps homeless shelter, Meals on Wheels, the SAFE Alliance shelter and the Boys & Girls Clubs are a few of the local and national programs we are donating to that are in need of support during this crisis,” he added.

Herman, who does not tweet often, said the UT family is grateful for all the employees and volunteers at these organizations, “as well as the healthcare workers and first responders who are on the front line of the crisis.”

“We hope others will join us in supporting our community,” Herman said. “Together, we can make a Texas-sized difference for our neighbors in need. Hook ’em.”

Herman and the Longhorns were supposed to spend this week focused on spring practice. Tuesday was supposed to be the first of 15 workouts. However, all of that is on hold.

Big 12 commissioner Bob Bowlsby is scheduled to hold a teleconference on Thursday where it’s anticipated he will give more guidance.

On Second Thought Ep 174: Brian Davis on the chances of Texas spring football being cancelled and coronavirus impact on Longhorn Foundation