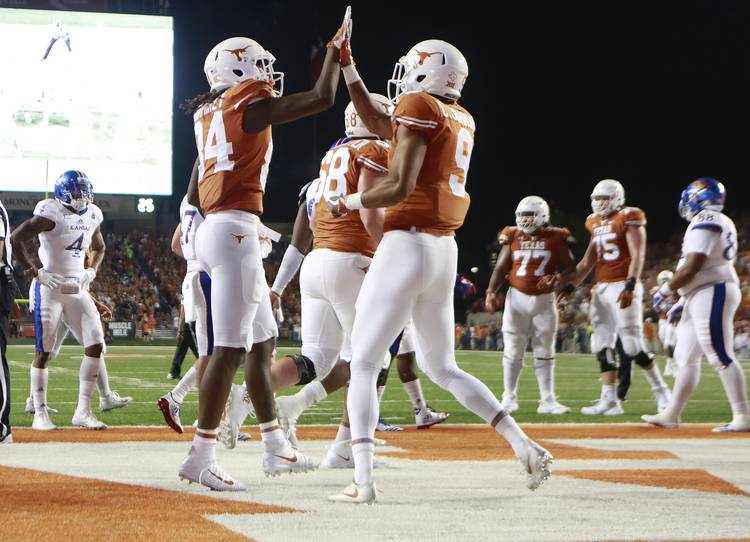 Will Brandon Jones become a Jaguar? Will either Devin Duvernay or Collin Johnson become a Saint?

The NFL Draft is set to begin on April 23. Texas has had a player drafted in each of the last five drafts, and UT has a handful of hopefuls on the NFL’s radar this year.

Where will Texas’ prospects next play football? NFL analysts and pundits have been kept busy with the publishing of their predictions in the lead-up to the NFL Draft. Here is a rundown of where the Longhorns have landed in five recent mock drafts:

Brown published his predictions for the first four rounds this week. If these projections are accurate, Texas fans won’t need to tune in until the draft’s third day. Brown expects to see three Longhorns taken in the fourth round. In 2019, UT didn’t have a player drafted until the fifth round.

Like Brown, Reuter also sees New Orleans taking a UT receiver with the 130th pick. Reuter, though, thinks the Saints will be eyeing Johnson instead of Duvernay. New Orleans signed Lil’Jordan Humphrey as an undrafted free agent in 2019, and Humphrey appeared in five games this past season. Less than two years ago, Texas started Humphrey, Johnson and Duvernay in the New Orleans-hosted Sugar Bowl.

Duvernay was the only Longhorn who ended up on Yates’ three-round big board. Detroit has picked 12 Longhorns since 1953. It last drafted someone from Texas in 2015.

Minnesota currently has two UT-raised defensive backs on its roster, but Driscoll recently matched a Longhorn receiver with the Vikings. Why? Guessed Driscoll: “The Vikings sent Stefon Diggs to the Buffalo Bills creating a major need at the wide receiver position. Devin Duvernay possesses world-class speed and should be able to develop into a reliable target for Kirk Cousins.”

Easterling released three rounds worth of predictions this past weekend. Jones, who was sent to Dallas in the third round, was the only UT representative among those faux picks. Four Longhorns, though, were scooped up during Easterling’s most-recent swing at a seven-round mock draft.