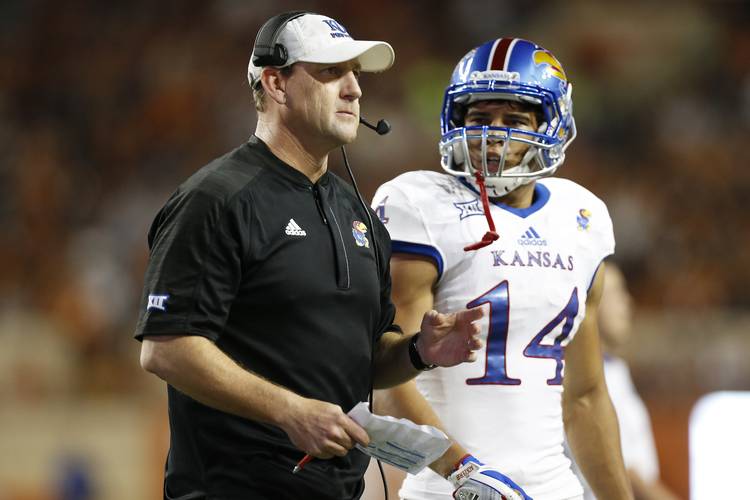 Texas coach Tom Herman wanted to hire his friend and former Kansas coach David Beaty for a low-level analyst job with the Longhorns before Beaty’s former athletic director cautioned UT against it.

The details of the job offer were made public in court filings and first reported by the Kansas City Star. Beaty is suing Kansas Athletics, Inc., for $3 million in a wrongful termination suit.

According to the Star, Beaty testified in February that he had been offered a job at UT, moved to Austin and had even received a UT staff identification number.

It’s become commonplace around the country for head coaches to hire analysts, people who examine game film, prepare scouting reports for the full-time coaches and do self-scouting on their employer. Most times, these positions are filled by coaches who are between jobs. At UT, an analyst makes about $25,000.

Before Beaty started work, Texas athletic director Chris Del Conte called his Kansas counterpart Jeff Long as a courtesy, according to The Star.

“Jeff stated at that point … ‘I wouldn’t do that if I was you. His behavior is egregious,’” Beaty testified. “‘It was definitely Level I.’ And that … I think it made Mr. Del Conte take pause.”

A Level I infraction is considered the most serious by the NCAA. Beaty was later accused of a less serious Level II infraction, which was self-reported to the NCAA by Kansas.

Ultimately, Texas did not hire Beaty. “I have no comment on that issue,” Del Conte told the American-Statesman on Wednesday.

The university typically does background checks on all incoming hires. Historically, UT officials have steered clear of anyone under any possible NCAA cloud. Former football coach Charlie Strong had to fire one of his assistants the same day UT learned NCAA investigators were looking into his actions at a previous school.

Beaty, Long and Kansas athletics are now entangled in a long-running legal battle over whether the school should pay the balance of his contract. Beaty was 6-42 in four seasons at Kansas from 2015-18.