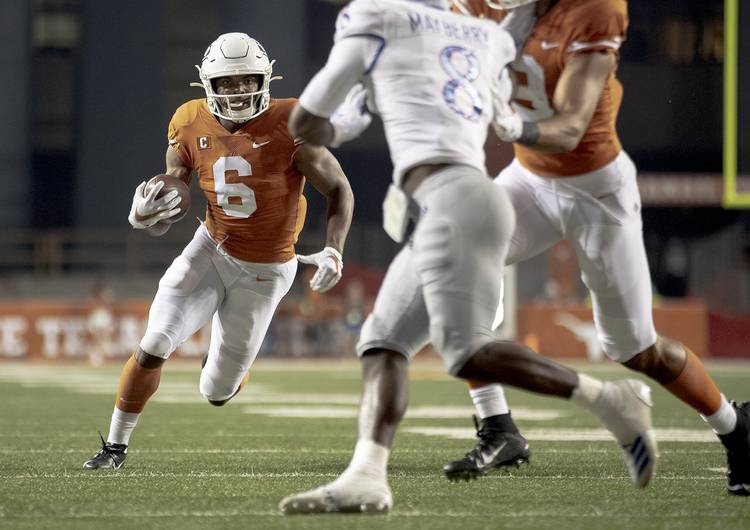 Texas receiver Devin Duvernay (6) runs for a touchdown against Kansas on Oct. 19, 2019 in Austin. [NICK WAGNER/AMERICAN-STATESMAN]

Will Brandon Jones become a Buccaneer? Will Collin Johnson become a Saint?

The NFL Draft is set to begin on April 23. Texas has had a player drafted in each of the last five drafts, and UT has a handful of hopefuls on the NFL’s radar this year.

Perhaps the most-intriguing Longhorn is Devin Duvernay, a receiver who enjoyed a breakout season in 2019. The 106 footballs caught by Duvernay this fall ranked third nationally. He also averaged 13.1 yards per catch and hauled in nine touchdown passes.

Does a 100-yard season guarantee a job in the NFL? Perhaps. Of the last 15 players who entered the NFL Draft following a 100-catch season, 13 were selected.

In a two-round mock draft that was published on Tuesday, ESPN analyst Mel Kiper, Jr., matched Duvernay with the 57th overall pick. ESPN’s Todd McShay predicted last month that Baltimore would use a second-round pick on Duvernay. Jeff Legwold, who also writes for ESPN, has listed Duvernay as the 83rd-best prospect in this draft class.

Not all of the experts agree with ESPN, though. In fact, NFL.com writer Chad Reuter sees a sixth-round pick in Duvernay’s future.

Where will Texas’ prospects next play football? NFL analysts and pundits have been kept busy with the publishing of their predictions in the lead-up to the NFL Draft. Here is a rundown of where the Longhorns have landed in five seven-round mock drafts that were published recently: