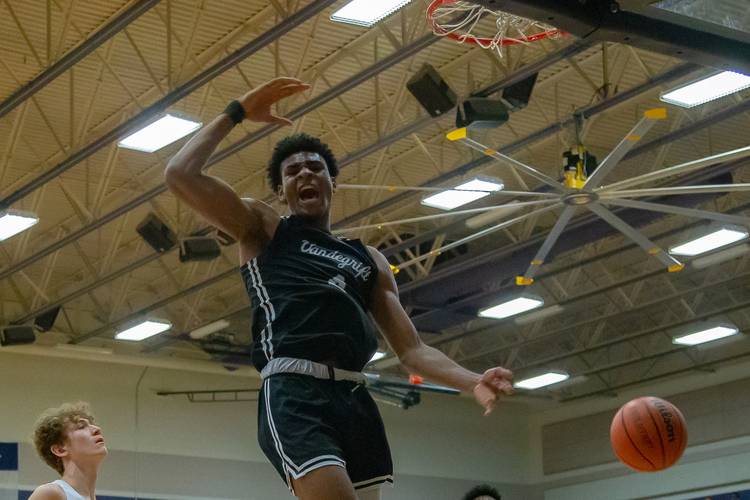 Vandegrift Vipers forward Greg Brown III (4) celebrates coming down from his dunk shot against the Hendrickson Hawks during the third period at the District-13 6A basketball game on Friday, Jan 24, 2020, at Hendrickson High School. [JOHN GUTIERREZ/FOR STATESMAN]

Greg Brown III spent four years dunking on all comers at Vandegrift. Can he do it at the next level?

After months of playing coy, Brown finally made the announcement Friday that most expected all along. The 6-foot-9, five-star standout committed to Texas during a broadcast on his Instagram page.

Brown had been considering Texas along with Kentucky, Michigan, Auburn and Memphis, based on his social media posts. But most recruiting experts dismissed those other schools as folly. On Friday morning, 247Sports predicted Brown would pick UT with 100% confidence.

“I’m happy to say I’ll be committing to the University of Texas. Hook ’em, Horns.”

Few expected the NBA’s developmental G League to make such a hard push, though.

California standout Jalen Green, the No. 3 prospect in the nation according to 247Sports’ composite rankings, signed a one-year contract with the G League for a reported $500,000.

Brown, the ninth-overall best recruit nationally, was initially offered a low six figure deal that was rejected by the family, according to a source. The Undefeated reported that Brown’s family had a $300,000 offer on the table as of Wednesday.

Wherever Brown was going to land, that team was getting a ready-made scorer. Brown averaged 26 points and 13.2 rebounds last season while leading Vandegrift to a 33-3 record and the school’s first district title. Brown became the Gatorade Texas player of the year.

He’s not expected to stay at Texas long. Brown is widely considered a one-and-done type of play, much like Jarrett Allen or Mo Bamba.

Both Allen and Bamba had one-year stopovers at UT before going on to become first-round NBA picks. Jaxson Hayes was another freshman phenom who blossomed with the Longhorns and became a first-round pick.

“He still needs to physically develop and get stronger, but that comes with age,” Vandegrift coach Cliff Ellis told the American-Statesman. “Greg has a great work ethic. He is willing to put in the hours, that’s for sure.”