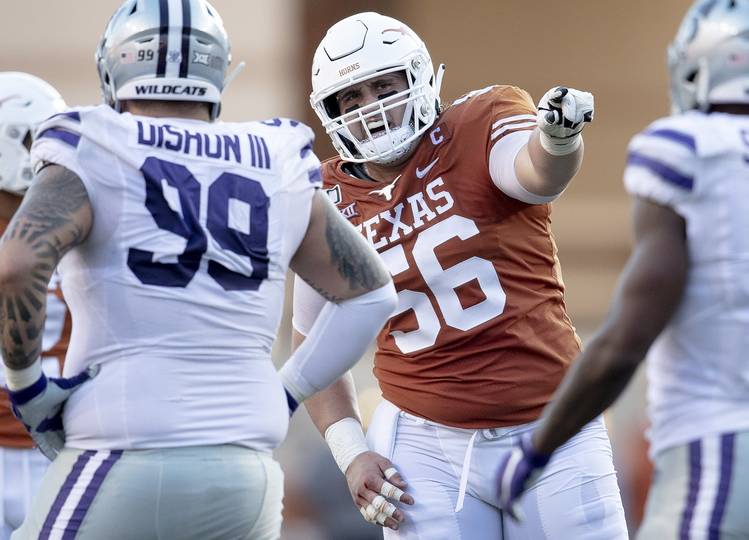 Texas offensive lineman Zach Shackelford (56) communicates to teammates during a game against Kansas State in Austin on Nov. 9, 2019. [NICK WAGNER/AMERICAN-STATESMAN]

The Tampa Bay Buccaneers have made several noteworthy transactions this offseason, but the signing of an undrafted free agent may be what catches the attention of Texas’ football fans.

Texas senior Zach Shackelford confirmed to the American-Statesman on Saturday that he will attempt to make Tampa Bay’s roster as an undrafted free agent. Shackelford has spent the past four seasons as UT’s starting center.

“Opportunities multiply as they are seized.”
-Sun Tzu

Congrats to @shackattack1997 on signing with the Tampa Bay @Buccaneers. It’s not HOW you get there, it’s what you earn once you ARE there.

A three-star signee out of Belton, Shackelford started as a true freshman in UT’s opener against Notre Dame in 2016. Shackelford went onto start 40 times for the Longhorns. On the Big 12’s honor roll, the 6-4, 305-pound Shackelford earned first-team accolades in 2019 and a second-team nod in 2018.

Shackelford was also named a team captain in 2019. This past August, then-UT defensive coordinator Todd Orlando said that Shackelford and quarterback Sam Ehlinger were “the backbone of this team.”

Shackelford was not among the 255 picks in the NFL draft, but he quickly decided to join one of the NFL’s hottest franchises. This offseason, Tampa Bay added quarterback Tom Brady and tight end Rob Gronkowski to an offense that already included talented receivers Mike Evans and Chris Godwin. As of Friday, Tampa Bay had the third-best odds to win the Super Bowl.

Tampa Bay did not use any of its seven draft picks on a center. Ryan Jensen and Anthony Fabiano are currently the only centers on the Buccaneers’ roster. Jensen recently completed his seventh year in the NFL. Fabiano has played in nine games since he entered the league as an undrafted free agent in 2016.

“Obviously over the past week you’ve been hearing a lot of buzz about them,” Shackelford said in a statement released by Texas. “The offensive line coach called me and said I have an opportunity to compete for a roster spot. It was the best option for me, and I couldn’t pass up that opportunity, so it was just a combination of all of those things. I’m just ready to get started.”