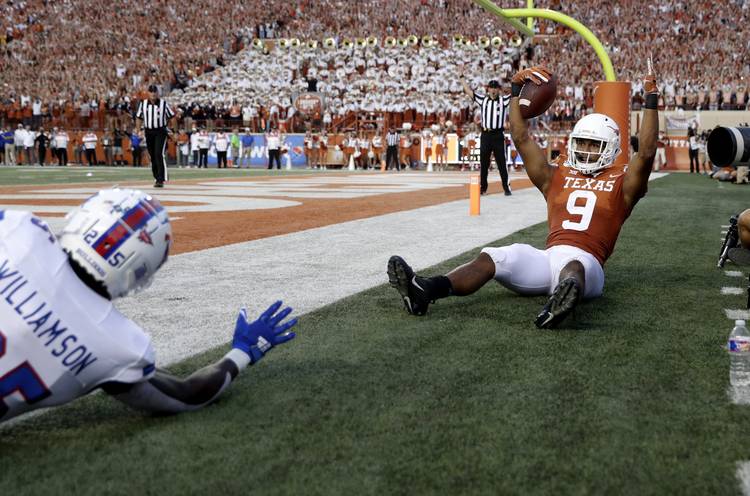 Texas receiver Collin Johnson had to wait longer than he hoped, but the standout Longhorn was finally taken in the fifth round of the NFL Draft. Johnson is headed to the Jacksonville Jaguars. Here are some of Johnson’s thoughts about the draft, as told to the Texas media relations office.

I’m at my girlfriend’s house and I was sitting there with the family, and I started slipping a little later than I thought I would, but at the end of the day, I just kept telling myself all I need is an opportunity. When I got the call, it made everything worth it. I know I’m going make the best of my shot.

On the Jaguars and the city of Jacksonville:

I’ve never been to Florida in my life, but it looks like that’s going to be my new home for the next few years. I don’t know much right at the moment, I have to do my research on the franchise, but I know it will be a great place to play and they have some exciting players on offense like Gardner Minshew. More importantly, I know that’s the team that gave me an opportunity, so I’m excited.

I talked to all of them. I talked to the head coach and the GM, and they all call me. Honestly, I kind of blacked out (laughing), I just saw Jaguars pop up on my phone, and it was definitely a really cool feeling.

On his family’s reaction:

Their reaction was happy for me and relieved, just like me. My dad played in the NFL, so that’s special, and I’m just excited.

On having other Longhorns in the NFL for support:

No question that’s great, and the one I want to give the most credit to is Charles Omenihu. He’s guided me through this whole process. He’s looked after me the whole time and has been checking up on me and telling me to stay patient. You see how his career has gone so far after getting drafted in the fifth round, so he’s been giving me great advice.

On being prepared for the NFL coming out of Texas:

On achieving his dream:

It’s unreal. I’m just so thankful I got the opportunity with Jacksonville, and it’s almost surreal. I got the call and I made it all worth.