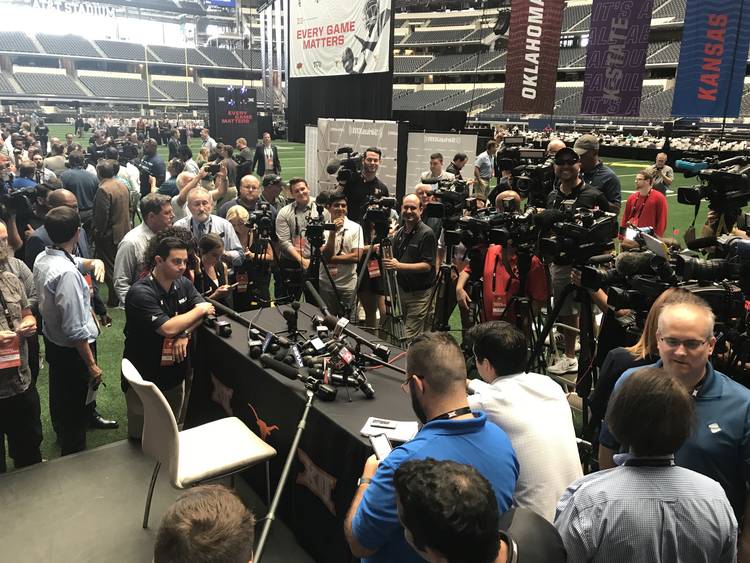 Even in the expansive AT&T Stadium, it’s hard to practice social distancing. So the Big 12 is calling an audible on its major preseason event and taking football media days online.

The league announced Thursday that its signature summer event would be held virtually on July 20-21 instead of going to Arlington and spreading out across the Cowboys’ home stadium. The final dates and schedule will be formalized later, a Big 12 spokeswoman told the American-Statesman.

“Given the uncertainty of the current environment, it’s in the best interest for the safety of everyone involved,” league spokesman Bob Burda said.

The Big 12 is the first Power Five league to cancel its media days, or at least deviate from the norm.

The format for media days would probably make doctors cringe. Each of the league’s top players — like Texas quarterback Sam Ehlinger, for example — will sit at a table on an elevated platform. Dozens of reporters crowd around each table, elbow to elbow, and crane to hear what’s being asked and answered.

It’s even unclear how each school will handle interview sessions going forward each week. Typically at UT, players meet reporters on Tuesdays at lunch. Each player sits at a small table while reporters stand around in a half-circle, all within feet of each other.

At the Big 12 basketball tournament, reporters were required to sit back in their chairs while coaches and athletes spoke at an elevated podium, at least 10 feet from the masses.

No final decisions have been made how UT will handle interviews this season. In recent weeks, athletes and coaches have been doing group interviews through Zoom online webcasting.