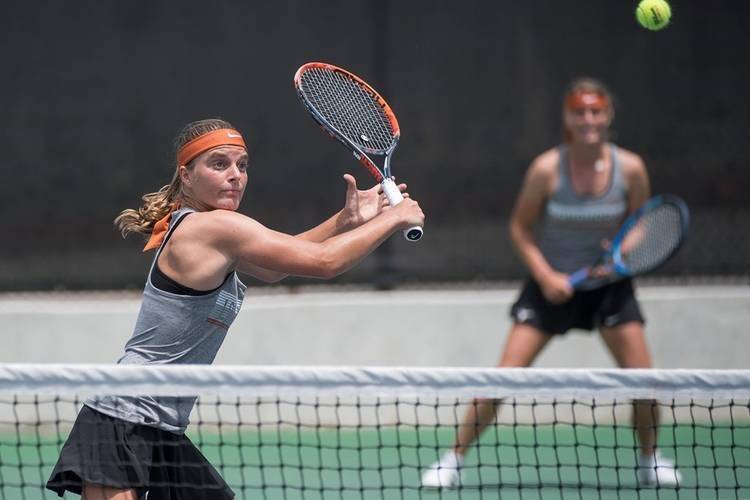 The Turati sisters, Anna and Bianca, were 7-3 this season as a doubles pair before the season was stopped by the coronavirus. [Texas Athletics File]

In a first-person essay, Bianca Turati wrote that she arrived at Texas as a “shy Italian girl who could barely speak English.” The All-American tennis star now has the confidence and credentials to conquer the world.

Turati announced Wednesday that “my incredible journey at Texas has come to an end” and will go pro.

“It is time for me to end a chapter of my life and begin a new one,” Turati wrote in a post on UT’s website. “I am ready now to take that step of throwing myself into professional tennis. I am ready to go after my dreams. And I am very excited about it.”

Turati didn’t just learn how achieve on the tennis court during her time in Austin. She sharpened her English-speaking skills, became the Big 12 player in the year in 2018 and rose to the No. 1 spot on the ITA singles ranking. It was the first time a Longhorn women’s tennis player had reached that spot since 1995.

Turati was 57-19 as a singles player her first three seasons and was 11-1 this spring before the coronavirus stopped everyone.

“I decided that getting a scholarship at one of the best universities in the world was a once-in-a-lifetime opportunity that I couldn’t miss,” Turati wrote. “So, I decided to commit to The University of Texas.

“I can say now that it was the best decision I’ve ever made,” she continued. “The best one of my life. College helped me grow up so much as a person and tennis player. It made me become a much tougher woman. A confident one. One that knows what she wants.”

Born in Como, Italy, Turati played at UT with her twin sister Anna. This season as a doubles team, the Turati twins were 7-3.

“Over the past four years, Texas has reestablished itself as a top women’s tennis program nationally,” UT women’s coach Howard Joffe said in a statement. “The exemplary state of our team and program is the product of lots of devotion by many people. But the one person whose contributions, attitude and conduct that has gone the furthest and had the most profound effect has been Bianca Turati.”

Joffe said Turati will graduate with a near 4.0 grade point average. “As a competitor, she was fair and ferocious at the same time and won at an astounding clip at the top spot,” Joffe said. “But it is as a teammate and human being that her departure will be most felt.”

Turati wished the Longhorns well in the future. This year’s team was 11-3 overall and had just beaten No. 15 Michigan and No. 48 Iowa State before the stoppage.

“And thank you, UT. You have given me so much,” Turati wrote. “Finally, it’s obvious but I want to say it super proudly. I will always bleed burnt orange. Hook ’em forever.”

Texas ex Shane Buechele completes his fundraiser, will give $50,000 check to city of Dallas