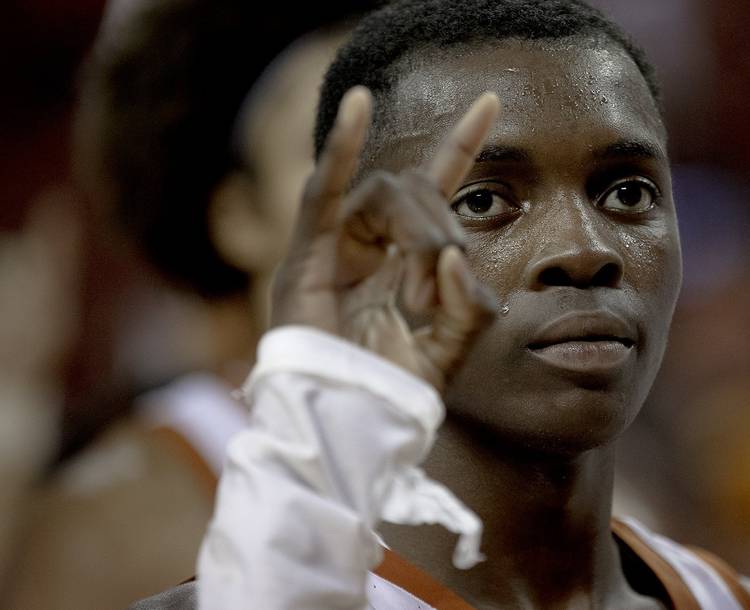 Texas guard Andrew Jones (1) stands for the playing of "The Eyes of Texas" following Texas' 69-45 win over Northern Colorado in an NCAA college basketball game on Tuesday, Nov. 5, 2019, in Austin, Texas. [NICK WAGNER/AMERICAN-STATESMAN]

Texas basketball player Andrew Jones has earned the right to speak out on social injustice.

Easily one of the most inspirational people I’ve ever come across in a quarter century of covering sports, Jones earned that right not because he beat cancer but because he is an American.

It’s his birthright. This country was built on people speaking out against authority for social change, and that still should apply in in the present day, right?

On Monday, Jones tweeted his outrage at the mistreatment of black men in this country and criticized the president for his handling of the pandemic and the subsequent civil unrest.

Many, including yours truly, agreed with several of his points, but one responded with a familiar, tired refrain: Stick to sports.

Welcome to 2020, where that response has zero teeth. The young athletes are being heard nowadays and good for them.

“Only value you think I bring to this world is for sport entertainment,” Jones tweeted. “I’m a Free Black Man before I’m anyone’s puppet or source of entertainment.”

Jones and others like his teammate Jase Febres and Longhorns quarterback Sam Ehlinger — a 21-year-old suburban white kid who has admirably pledged his support to the Black Lives Matter movement — have graduated from just playing a sport to taking an active role in the world happening around them.

While some universities over the decades have sought to mute their student-athletes when it came to voicing opinions on matters outside of the games they play, many of today’s athletes have shown that institutional silence doesn’t line up with their core beliefs.

Jones invited the Twitter follower to unfollow him, by the way. Not to worry, he has thousands of others in his corner because he is speaking truth to power. He’s using his platform for the betterment of his community and his country. His goal is not to incite, but to improve.

Texas running back Daniel Young tweeted, “I will always be a black man before I am a student athlete.”

Some things in life are much better than scoring touchdowns or making a 3-pointer. Jones, Ehlinger, Febres and others their age are no longer on the sidelines of their community. The recent deaths of Ahmaud Arbery and George Floyd have stirred up a nation and our younger generation is on the front lines in this fight. Good for them.

It occurred to me years ago that the young generation had something us older Americans didn’t: Unity. Through the struggles of previous generations, today’s young adults are living a better existence than their predecessors. With that said, it’s the advantages given to them that make them the ideal activists to make our country even better.

If they can stand together against the unfair treatment of their friends, teammates and fellow citizens, we should listen to them. And if you’re more teed off about the rioting and looting than you are about the deaths that lit this switch, then you need to listen more closely.

The kids are speaking and they have something to say.

For the rest of Cedric’s Nuggets, including his thoughts on what coaches are saying and not saying on social issues and Major League Baseball, visit here.