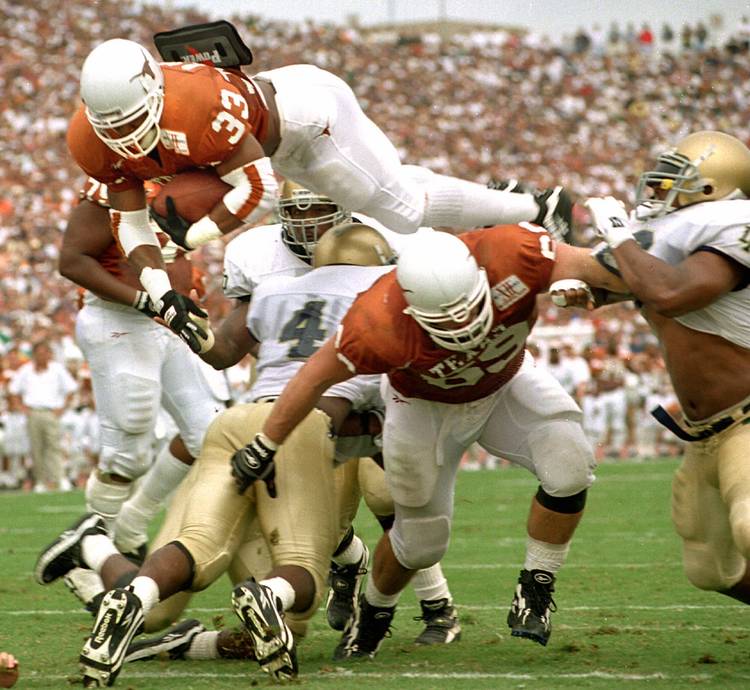 Texas running back Priest Holmes leaps through the air to score Texas' second touchdown in the second quarter to put them ahead 14-3 for the moment. He follows the block of teammate Dan Neil into the air and end zone on Sept. 21, 1996. Tom Lankes/American-Statesman Staff

Texas exes Dan Neil and Kenneth Sims are both on the 2021 College Football Hall of Fame ballot unveiled Tuesday.

Neil was a four-year starter on the offensive line from 1993-96. A finalist for the Outland Trophy, Neil started 49 games and became a first-team All-American as a junior and senior. He was part of UT’s Southwest Conference title team in 1995 and the first Big 12 championship squad in 1996.

Neil was a third-round pick by the Denver Broncos and won back-to-back Super Bowls in 1998 and ’99.

Sims was a two-time consensus All-American and won the 1981 Lombardi Trophy, awarded annually to the nation’s best lineman. Sims was named the Longhorns’ team MVP in 1980 and ’81, becoming the first UT player to earn that distinction in back to back years since Chris Gilbert (1966-68).

Sims set a then-school record with 23 tackles for loss in 1981 and holds the school career record for most forced fumbles (15). He was selected first overall by the New England Patriots in the 1982 draft and played eight seasons in the NFL.

To be eligible for the Hall of Fame, a player must have won first-team All-America status and be at least 10 years removed from college football. The announcement of the 2021 College Football Hall of Fame class will be announced early next year.