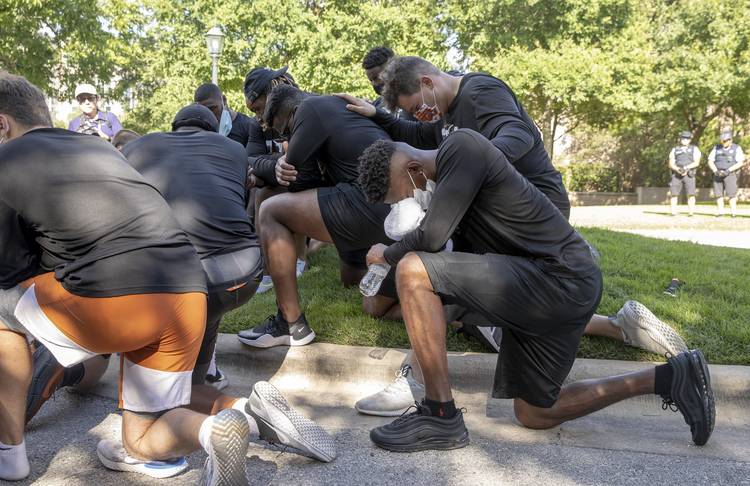 University of Texas football players kneel in silence for nine minutes at the end of a team march to the Capitol on on June 4 to protest the killing of George Floyd. [JAY JANNER/AMERICAN-STATESMAN]

Texas exes across the athletic spectrum were tweeting their support Tuesday for the current Longhorns engaged in campus activism to change UT’s racial environment.

“The University of Texas athlete alumni are in absolute opposition to racism in any form and are engaged in meaningful collaboration to enact change. We are united in our support for our current student athletes,” it read, followed by the hashtag #WeAreOne.

Can't change the past but we can change the future #UTXAA #WEAREONE #BURNTOUT #ITOOAMTEXAS #HookEm pic.twitter.com/Q37J6cNcPU

“Proud of the way the young men at @TexasFootball have lead the charge in the fight against racism,” Acho tweeted. “We are with you, we are for you, we are one.”

Nate Boyer added, “You come at that @TexasFootball locker room you come at me and every other athlete that ever set foot in there.”

The current players made a social media push last Friday to put forward a series of requests that addressed UT’s racial past. The players asked UT to change the name on various buildings, honor UT’s first black letterman Julius Whittier and change the lyrics to “The Eyes of Texas.”

Interim Texas president Jay Hartzell announced Monday he would start meeting with campus leaders and athletes to determine and formulate a plan of action for later this summer.