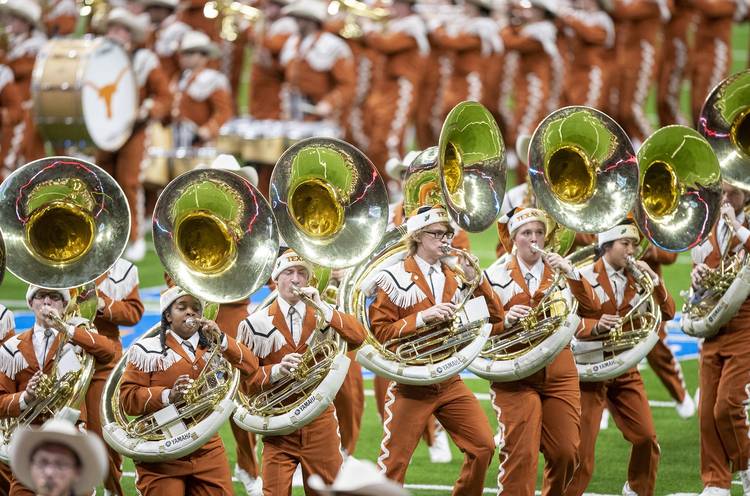 Texas Longhorns band performs pregame against Utah Utes during an NCAA college football game at the Valero Alamo Bowl at the Alamodome on Tuesday, December 31, 2019 in San Antonio, Texas. [RICARDO B. BRAZZIELL/AMERICAN-STATESMAN]

Big 12 schools have reached an agreement where visiting bands and spirit groups will not travel to conference road games this season because of COVID-19 concerns, according to the Lubbock Avalanche-Journal.

The decision comes as Texas-based athletic directors grapple with how to space out season ticket holders to meet Gov. Greg Abbott’s current mandate of 50% stadium capacity.

“We have informed our band and spirit squads that there will be no travel to road games this year,” Giovannetti told the Avalanche-Journal. “I don’t know if the word would be ‘mandate’. I just think all the schools agreed, for safety and social distancing and everything, it would make the most sense.”

A Texas spokesman declined comment. The Big 12 is expected to announce a series of changes fans can expect sometime later this summer.

The Longhorns are likely to comply with no bands at true conference road games. The Texas-Oklahoma game is another matter. Both the Longhorns and Sooners will likely want to bring bands and spirit groups to what is considered a neutral-site game at the Cotton Bowl in Dallas.

The State Fair of Texas announced Tuesday it was canceling its annual event but it would not affect the Texas-OU game. The two schools have the final say on their matchup on Oct. 7.

If the governor’s 50% stadium capacity remains in force, Texas and Oklahoma are likely to distribute just 25,000 tickets to their respective fan bases for the Cotton Bowl matchup. As of now, it’s unclear how many tickets students would receive in that scenario.

As of now, Texas is still expected to keep 1,000 tickets for visiting fans at Royal-Memorial Stadium. The league minimum is normally 4,000, but UT athletic director Chris Del Conte informed the Big 12 of the lower number last season when the south end zone bench seats were removed for construction.

Some schools have penalized the Longhorns with lower ticket allotments at their home venues. Others have still required UT to purchase a full 4,000 ticket allotment, whether the school could sell them or not. That type of negotiating is likely to continue this season.