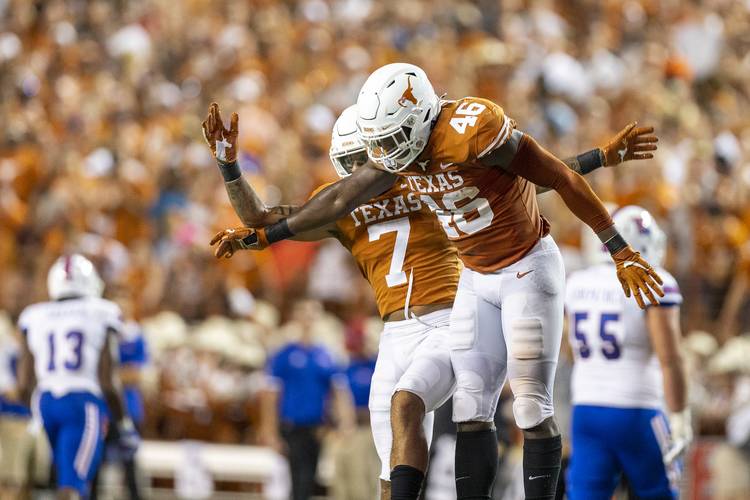 On Monday, two members of UT’s football team made the cut for the Bednarik Award’s preseason watch list.

Texas juniors Joseph Ossai and Caden Sterns were two of the 90 names on the annual watch list. The Bednarik Award is given each season to the best defensive player in college football.

Ossai led UT last year with his 90 tackles. He ended his sophomore season with a nine-tackle, three-sack performance in the Alamo Bowl. According to Texas, Ossai is the only FBS-level player in the last 20 years to record three sacks and six stops behind the line of scrimmage in a bowl game. Primarily used as a linebacker in 2019, Ossai will soon play off the defensive line more in new coordinator Chris Ash’s defense.
Advertisement

Sterns, who has started 21 times at the safety position, is set for his third season in Texas’ secondary. He registered 58 tackles and one pass break-up in 2019. During the 2018 season, Sterns was a Thorpe Award semifinalist and his four interceptions tied a freshman-class record at Texas.

No Longhorn has won the Bednarik Award, which was first handed out to Northwestern’s Pat Fitzgerald in 1995. Former UT linebacker Derrick Johnson was named a finalist in 2004.

‘Great day to be a Longhorn’: Athletes react after Texas announces a plan to tackle its racial issues