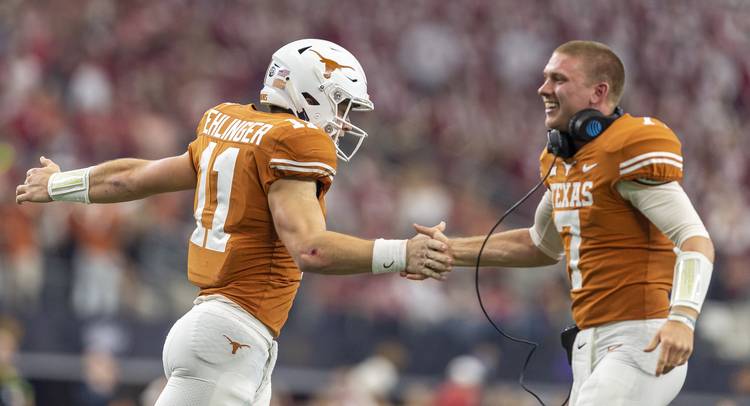 Texas quarterback Sam Ehlinger (11) celebrates a touchdown against Oklahoma with Shane Buechele (7) at AT&T Stadium in Arlington on Dec. 1, 2018. [Stephen Spillman for Statesman]

Texas senior quarterback Sam Ehlinger was placed on the preseason watch list for the Davey O’Brien Award on Tuesday.

The Davey O’Brien Award is presented annually to college football’s best quarterback. Previous recipients of this award include Vince Young (2005) and Colt McCoy (2009).

Check out our live announcement of the 2020 Davey O'Brien Award watch list here. 30 great names on this list and plenty more college quarterbacks set to make their marks when the season kicks off! https://t.co/Htm8NWBHju

Last season, Ehlinger threw for 3,663 yards and 32 touchdowns. Only five quarterbacks who are returning to a FBS-level football team this fall threw for more yards last year. Ehlinger’s touchdown passes were bested by six returnees. Ehlinger also ran for 663 yards and seven touchdowns during his junior year.

In total, three Longhorns have won the Davey O’Brien Award. Former UT running back Earl Campbell was honored in 1977 when the award was given to the top player in the southwest.

‘Great day to be a Longhorn’: Athletes react after Texas announces a plan to tackle its racial issues