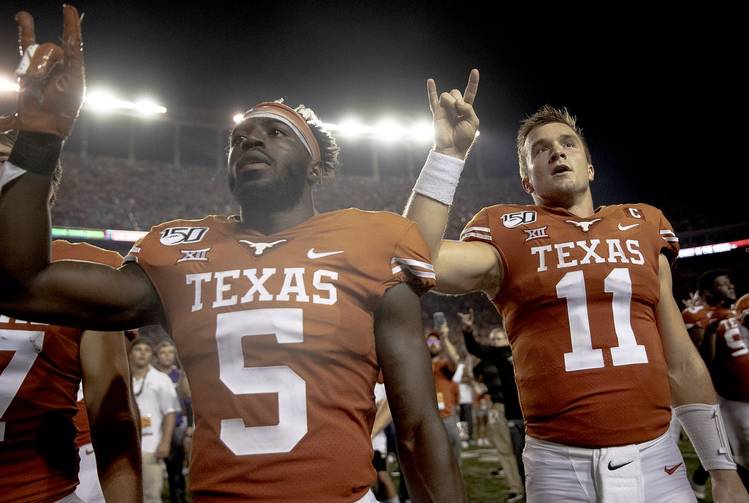 Texas defensive back D'Shawn Jamison (5) and quarterback Sam Ehlinger (11) hold up the "Hook 'Em Horns" sign for the playing of "The Eyes of Texas" following Texas' 36-30 win over Oklahoma State in an NCAA football game on Saturday, Sept. 21, 2019, in Austin, Texas. [NICK WAGNER/AMERICAN-STATESMAN]

Such is life, but when something affects future generations, it must be examined, even if it’s a week old.

It’s a gigantic shift in the culture at the University of Texas, not only in the athletic department, but in our city, our state, and maybe even our nation.

So what of the university keeping “The Eyes of Texas” as its school song? Well, that was a virtual certainty from the beginning, but the administration’s announced changes still showed a willingness to negotiate in good faith with its young student-athletes — this was a negotiation, make no mistake about it — with a near-perfect amount of tolerance. The young adults on this team will tell their grandkids about the year they changed this campus forever.

The biggest questions about the Texas football experience in the 2020 season — if we have one — have to be what will happen following the games:

Will the players stand together and sing the Eyes?

Will they all leave before the song is played?

Will some kneel quietly while others stand and sing?

Would any split be among racial lines?

Head coach Tom Herman emerged from the spring as a supporter of his players, unlike some others in his profession who remained eerily silent while change was taking place on college campuses. The guess here is his team leaders are in place to make sure the traditional post-game routine won’t prove to be a fiasco and embarrassment.

As for the changes made on campus, gold stars have to go to the athletes and progressive student leaders along with interim President Jay Hartzell and athletic director Chris Del Conte. They enacted some real positive change at a time when our communities were hurting for some good news.

The athletes spoke and they were heard. Meanwhile, the stick-to-sports crowd took a 98-mile-per-hour fastball to the helmet with the message that the days of treating athletes like fast-running, high-jumping, bulldozing robots are forever in the past. They have a voice and those voices are important.

It’s a new day and while 2020 continues to be a real global clunker, that little piece of promise will hopefully permeate through the minds of the younger athletes on campus along with future Longhorns who have hopefully been paying attention.

Much love to the Jamail family, which selflessly suggested renaming the field at DKR after Heisman Trophy winners Earl Campbell and Ricky Williams after late patriarch Joe Jamail gave so much to the university as its most high profile benefactor.

To honor Black student pioneer Heman M. Sweatt and erect statues of Julius Whittier (football’s first Black letterman) and the Precursors (the school’s first Black undergrads) can only be described as tremendous, and the promise to do a better job of reaching out to more Texas kid from less fortunate circumstances only adds to their enduring legacy.

Also to rid the names of known racists from some campus buildings was another act of resolution and progress.

Much work remains, but the first step is always the most difficult. The history we’re witnessed has made it possible for more good history to come.

With open minds, change can happen.

Now, stop worrying about the general election and put on a mask so that we can get back to being a fun America.

For the rest of Cedric’s Nuggets, including his thoughts on high school football this fall and the legacy of Austin boxer Travell Mazion, visit here.