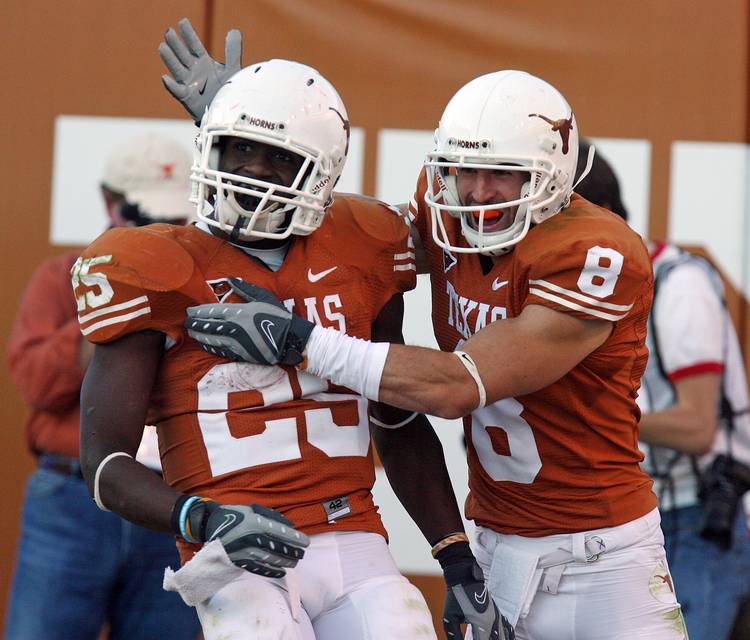 Texas football players Jamaal Charles and Jordan Shipley celebrate Charles' touchdown against Nebraska on Oct. 27, 2007. Both Charles and Shipley have been inducted in UT's Hall of Honor. (Deborah Cannon/AMERICAN-STATESMAN)

On Wednesday, 14 former Longhorns received the call to Texas’ Hall.

Texas will induct 14 people into its Hall of Honor, the athletic department has announced. Former men’s basketball coach Tom Penders will join 13 athletes in the Class of 2020. Plans for the annual induction ceremony have not yet been set.

Two of this year’s notable inductees are football players Jordan Shipley and Jamaal Charles. Shipley last played at Texas in 2009, but he remains the school’s all-time leader in career receptions (248). Charles enjoyed an 11-year career in the NFL after he became the fourth-leading rusher in UT’s history.

Other inductees include golfer Brad Elder, a four-time All-American, and volleyball’s Juliann Faucette Johnson and soccer’s Kasey Moore Powers, who both earned All-American accolades on three occasions. Alexandria Anderson and Erika Hansen-Stebbins, who respectively won individual NCAA titles in track and field and women’s swimming and diving, will join the Hall of Honor. UT also honored P.J. Tucker and D.J. Augustin on the same day that both ex-Longhorns will participate in NBA playoff games.