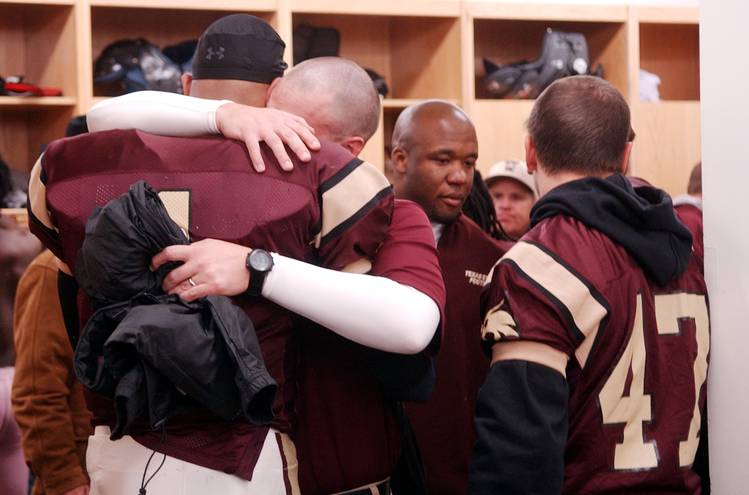 For most of his time at Texas, Tom Herman has let Sam Ehlinger run his football team’s offense.

On Herman’s timeline of quarterbacks, Ehlinger is preceded by players like Ohio State’s J.T. Barrett and Cardale Jones and Houston’s Greg Ward Jr. Then there’s Barrick Nealy, who was the quarterback of the first offense that Herman coordinated.

Nealy was Texas State’s star quarterback in 2005. Fifteen years later, he coaches the running backs on a UTEP team that will play Texas on Saturday. “Barrick made my career, I’m not ever going to deny that,” Herman said on Monday when he was asked about the upcoming reunion at Royal-Memorial Stadium.

This was a young man that had star potential written all over him, and it was kind of the right place at the right time for both of us. I’m forever indebted to him, his wife, Tiffany, his children. He has been a godsend in our lives, the Herman family life. And Barrick and I have stayed very, very close over the years.

I was really happy when (UTEP coach Dana) Dimel hired him off-the-field a couple years ago. Then to promote him to an on-the-field coach was a dream come true. I’m sure it was for him, but really for everybody that loves him and supports him and his family. It couldn’t happen to a better guy, just a tremendous man.”

During that 2005 season, Texas State went 11-3 and reached the semifinals of the Division I-AA playoffs. The Bobcats averaged 37 points and 439.1 yards per game. The 3,932 yards and 34 touchdowns that Nealy accounted for that season are still records at Texas State.

Nealy has worked at UTEP since 2018, but this is his first year as an on-field coach. In UTEP’s season-opening win over Stephen F. Austin, the Miners were paced by running back Deion Hankins’ 113 rushing yards and two touchdowns.

Tom Herman: What Texas’ coach likes about his team, and what he’s worried about

Election Day to be a day off for Texas’ football players