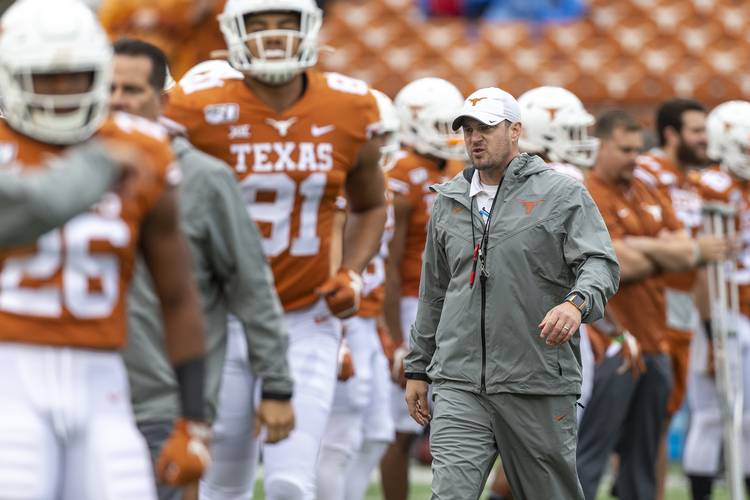 On injuries: Linebacker Ayodele Adeoye and wide receiver Kelvontay Dixon are doubtful. “Not likely, but not ruling it out,” Herman said. And reserve offensive tackle Reese Moore has tweaked his knee and “needs to be scoped.”

He was asked for three things about this team that he feels best about and three things he’s concerned about.

What he feels good about:

2. “Our veteran offensive linemen — three guys who have a lot of snaps under their belt.”

1. “We lost our two leading receivers, and replacing that production, we have to make sure happens.”

2. “The depth and consistency at linebacker has been a topic the entire offseason. I really like where we’re at, but those guys are unproven.”

3. “And then, things I’m worried about is making it through the dang season. We’ve got to be able to sustain this level of diligence for the entire season, which for a group of 18- to 22-year-olds will be difficult but certainly not impossible.”

Saturday marks the UT debuts of new OC Mike Yurcich and new DC Chris Ash. Herman was asked about what kind of “wow” factor fans should expect to see offensively.

“What will be the ‘wow’ factor?” Herman answered. “Again, this wasn’t a necessity to blow up and start from scratch with the offense. Our quarterback had the second most productive season in UT history last season and our offense finished in the top 15, top 10 in certain categories as well.”

Herman said there’ll be some new formations, some new plays, and a little bit quicker tempo. He said tempo would probably be the biggest noticeable difference to fans.

How game-days will look different, safety measures-wise: Everyone involved with the football program: Texas players, coaches, trainers, managers and support staff will be tested on Friday, as well as on Sunday and Wednesday this week. “The theory should be that everybody on the sideline or in your locker room has tested negative within 24 hours.”

The UT sideline will wear masks during the game. But other than that — plus the aesthetics of no UT band being there, no Bevo Boulevard, everyone in the stands masking up, 25% seating capacity, etc. — he said the game should be pretty much the same. “Halftime is halftime.”

Election Day falls on a game week this season, on Tuesday, Nov. 3. The Horns host West Virginia that Saturday. Herman was asked if he’ll allow his players to vote physically on Election Day or if early- or mail-in voting is being encouraged, for safety precautions?

“To clarify,” he began, “our team isn’t quarantined right now. This isn’t the NBA where we’ve got a bubble. So these guys go to the store, they go wherever, so I don’t think the exposure standing in line to vote is any different than living your normal, everyday life. Our guys understand and know the precautions needed to take when you’re in a large group, certainly a large group that might be in the same area for an extended period of time. But no, I have no hesitation allowing our guys to vote. The plan is to give them that Tuesday off from any football-related activities and provide transportation for those that want to go vote so we can make sure there really is no excuse not to vote. … And then it’s up to them to choose to decide if that’s something they want to participate in.”

The very next question after the election query was about Saturday’s opening opponent, UTEP, by El Paso Times reporter Bret Bloomquist. “Ahh, football! Thanks, Bret. I appreciate it.”

Herman’s scouting report: “This is a team that’s 1-0. We all have been around this game long enough to know the old usually adage is true — that teams make their biggest improvement from Game 1 to Game 2, and they’ve already had their Game 1 and we have not. And so they’re going to have a chance this week to work out some kinks that we’re gonna probably still be working out, to be quite honest with you. And that’s OK. It beats the alternative of not playing at all, that’s for sure.

He compared UTEP’s offense to Kansas State’s.”Some very unique formations, a heavy dose of quarterback run game that you’ve always got to be prepared for.” Defensively, he said, the Miners jump in and out of an even and odd front. “Our center and quarterback particularly are gong to have to be very, very dialed in to the different looks, blitzes, coverages that they can throw at us.”

Saturday’s opener kicks off at 7 p.m. at Royal-Memorial Stadium. It’s a Longhorn Network game. The Horns are 5-0 all-time vs. the Miners, who opened their season last Saturday with a win over FCS school Stephen F. Austin. Texas is 20-4 in season openers in the Big 12 era, though two of those losses have come under Herman (Maryland in 2017, Maryland in 2018).

Texas is favored by 43 points.