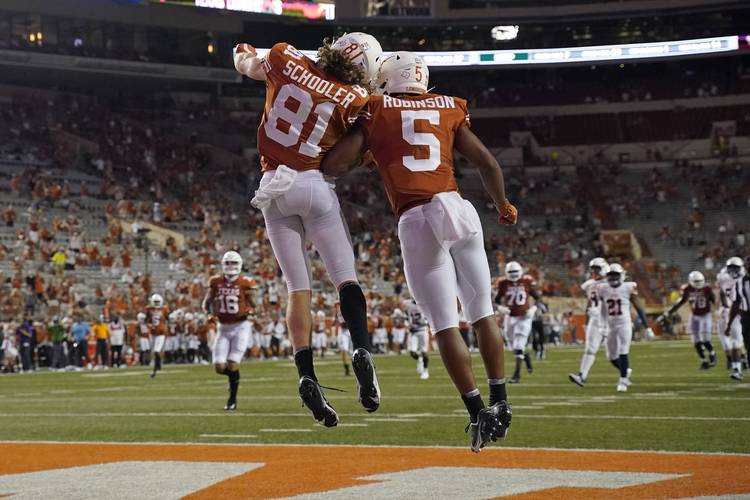 How best to sum up Texas’ season-opening 59-3 win over UTEP?

(a) A dominating performance offensively and defensively

(b) A career night for Heisman hopeful Sam Ehlinger

(d) It all means little because we’re talking about UTEP

The answer, of course, is E.

The Longhorns looked the part of a nationally ranked Power Five program with legitimate hopes of winning the Big 12 and vying for a CFP berth, at least against one of the bottom teams from Conference USA. Ehlinger was sharp, the passing game hummed, the defense stuffed the Miners throughout and it was a good opening performance for new offensive coordinator Mike Yurcich and defensive coodinator Chris Ash. The 4-2-5 looked effective. The Horns made plays on both sides of the ball, never looked shaky, and can now concentrate on the conference schedule.

The Miners looked woefully outmatched — literally from the first play, when safety Justin Prince took the wrong angle and gave up a 78-yard touchdown on the game’s opening snap. UTEP couldn’t get any traction in the running game — redshirt freshman Deion Hankins, who rushed for 100 yards in the opener, had 34 — and quarterback Gavin Hardison was 12 of 27 for 141 yards and an interception.

In the big picture, not much. Texas’ season will be defined by how the Longhorns fare in key games against Oklahoma, Oklahoma State and, well, go ahead and throw in Baylor, TCU and Iowa State, too. The Big Ten and Pac-12 opting out for the fall takes CFP contenders like Ohio State, Penn State, Oregon and Wisconsin out of the picture and opens the door for others, including possibly Texas.

Sam’s the man: Sam Ehlinger had a career night. In just two quarters. He passed for 426 yards — a career high — and five touchdowns — also a career high — in the first two quarters. He played one drive in the third quarter and then masked up on the sideline the rest of the way. He finished his night 25 of 33 for 426 yards and 5 touchdowns. Not in the boxscore are the little things: Hitting Joshua Moore in perfect stride on the 78-yard score, finding Marcus Washington in traffic, springing Jordan Whittington for 15 yards as his lead blocker on a jet sweep, and tucking it and running for a first down on a third down play. And sliding at the end of it, too.

Casey Thompson (4-7-55, 2 TDs) played for the rest of the third quarter and into the fourth. Hudson Card, the freshman from Lake Travis, came in with 9 minutes left. He attempted one pass.

Runnin’ Horns: We wondered how Texas would divvy up carries for running backs Keaontay Ingram, Roschon Johnson and Bijan Robinson. The touches were spread around. Johnson got the start, Ingram got the most carries in the first half and Robinson flashed in the second half.

A show of hands: Feeling better about the wide receivers? It was no Devin Duvernay, no Collin Johnson, no problem tonight. Joshua Moore (6-127-1) and Tarik Black (5-80-1) provided most of the spark in the passing game, but 10 different Longhorns recorded receptions. And like Moore and Black, a lot of them were fresh faces, guys like Brenden Schooler (2-65-1), Marcus Washington (2-43-1) and Kai Money (4-26-1).

A quiet night: Nine Horns caught a pass in the first half alone. None of them was Brennan Eagles, though. He and Ehlinger looked off in the first half. Ehlinger missed him on a slant from the left side — basically, it was the exact same play that Moore had just scored on, only on the other side — and also threw incomplete Eagles’ way later on that drive again, too.

It took Eagles one half and a quarterback change to record his first catch of the season, which also was his first touchdown of the season, too. He finished with the one catch, a really nice grab in the end zone that was contested by a defender.

Horns down: It wasn’t all perfect, of course. Cameron Dicker’s first field goal attempt of the season, from 43 yards, missed to the right. Al’Vonte Woodard was caught for a block in the back that wiped out a punt return for a touchdown by D’Shawn Jamison. Moro Ojomo committed a bad facemask penalty early in the second half.

Injuries: Cornerback Josh Thompson, who had a strong first half, was injured early in the second. He spent several minutes in the medical tent and then left for the locker room. It possibly was some sort of head injury. … Backup cornerback Jalen Green, who replaced Thompson, also was shaken up in the third quarter. … Jordan Whittington injured his knee late in the first half and didn’t play in the second; he came up awkwardly after an incompletion.

About the defense: No sacks for Ossai, though he did lead the Horns with 8 tackles. Freshman DT Alfred Collins had a sack. LB Demarvion Overshown had a pair of tackles for loss. Josh Thompson had a pick. Caden Sterns had a tackle for loss and a pass breakup.

2017: Maryland 51, 23-Texas 41. The Tom Herman era opened with a loss at home. Ehlinger would get his first career start the next week.

Texas is pouring it on: Horns blowing past UTEP at halftime, 45-3