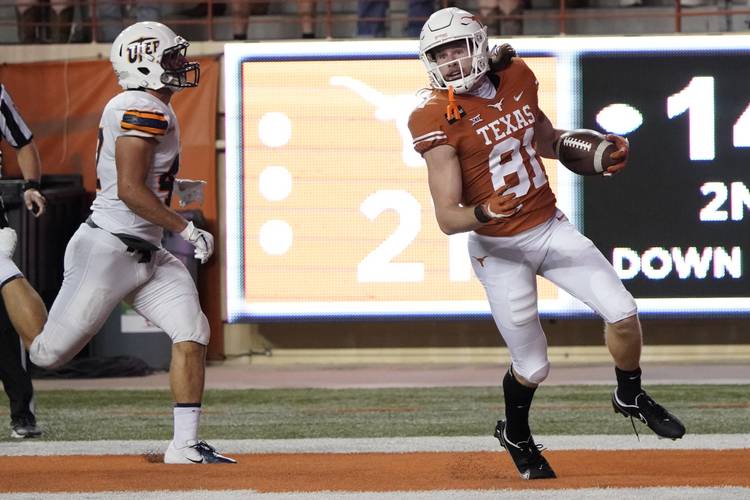 Texas receiver Brenden Schooler (81) runs into the end zone for a touchdown against UTEP in Austin on Sept. 12, 2020. (AP Photo/Chuck Burton)

Texas receiver Jordan Whittington won’t make any appearances in the slot against Texas Tech on Saturday, but Jake Smith might.

Texas coach Tom Herman told reporters on Monday that Whittington’s recent knee surgery was successful. Herman had previously said a “small tear of his lateral meniscus” would sideline the redshirt freshman for up to a month.

Two weeks ago, Whittington started at “H” receiver in UT’s opener against UTEP. Smith, meanwhile, was sidelined by a hamstring injury. On Monday, Herman noted that Smith was continuing to rehab and would start running later this week. Herman wagered that Texas would have a better idea about Smith’s availability by Wednesday or Thursday.

Smith, a sophomore who caught six touchdown passes during the 2019 season, and Whittington were the only slot receivers on UT’s depth chart ahead of the UTEP game. On Monday, Texas listed sophomore Kai Money and graduate transfer Brenden Schooler as Smith’s back-ups.

Both Money and Schooler caught touchdown passes in the 59-3 rout of UTEP. A walk-on, Money was making his first appearance with the Longhorns. Schooler spent the past four years at Oregon and boasts 45 career catches on his résumé.

If Smith needs a breather or is unable to go, Texas could also run more plays out of its “12 personnel” package. That would replace the slot receiver with an additional tight end. All four of the tight ends that Texas has on scholarship — Cade Brewer, Jared Wiley, Malcolm Epps and Brayden Liebrock — played against UTEP. Brewer hauled in a 20-yard touchdown pass, and Epps scooted 40 yards on a lateral play. Liebrock caught two passes and recovered a key fumble.

“I feel really good about the four guys we have there,” Herman said. “I do think especially with J-Whitt out and Jake kind of on the mend, I think you’ll see more and more 12 personnel. Our guys are versatile enough to do it. They can run and catch, but they can also stick their face on people and block them in the run game.”