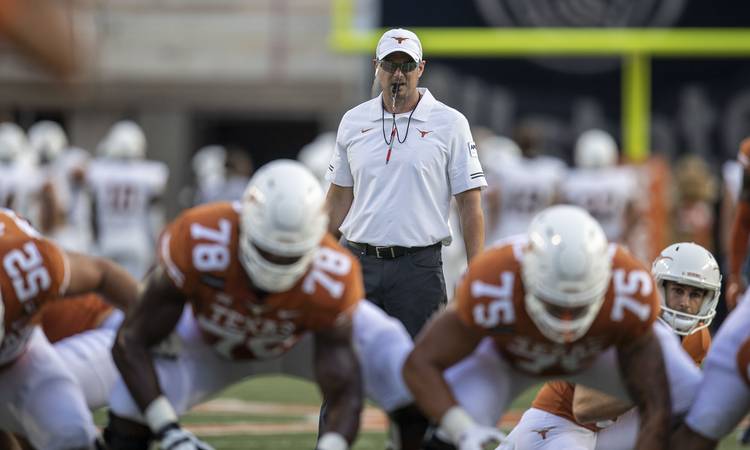 Texas head coach Tom Herman watches warmups ahead of a game against UTEP in Austin on Sept. 12, 2020. [RICARDO B. BRAZZIELL/AMERICAN-STATESMAN]

The state of the Horns: “Glad to get out of Lubbock with a win,” Herman opened his Zoom.

He later was asked whether being 2-0 makes it easier or harder to dismiss the harrowing win in Lubbock. “I don’t think you flush it just ’cause you’re 2-0. Every game you better flush by the time you hit the sack Sunday night,” Herman said. “Whether you win a game, you want to learn from the mistakes made, nobody’s ever played a perfect game and there’s always things to improve upon. It does help, though, when you have to learn some very hard lessons and you still wind up winning.”

And fix the special teams.

“Our players on defense, they’re embarrassed,” Herman continued. “They watched the same video you watched and were part of the same game everybody else saw. They know that they’ve got to tackle better. It wasn’t, for the most part, any missed assignments or out of positions. We just didn’t finish plays when we needed to.”

Herman was later asked what he felt good about coming out of the Tech game. He said he was pleased with the receivers (“an up and down day, but man, those last three drives I thought they played really well”), the fact that the Horns rushed for 200 yards (“That, I think, helped take some pressure off of Sam”) and “just from a team-wide sense, I really, really feel like these guys, there’s a different togetherness about this crew that was very evident in late in that fourth quarter and in overtime. Those guys were playing for each other.”)

Injuries: One of Texas’ top two slot receivers that have been missing in action should be back this week. Jake Smith is practicing full speed and should play against TCU, Herman said. … Running back Bijan Robinson, who had a scary landing after hurdling a Texas Tech defender, did not practice on Sunday. Herman said the hope is that the freshman is back on Tuesday or Wednesday. … And, speaking of slot receivers, Jordan Whittington (torn miniscus) will miss this week’s game.

Managing the secondary: Herman fielded a couple of questions about the Texas defensive backs. Alan Bowman ripped the Horns for 325 yards and five touchdowns. On the first question, he explained that a lot of the secondary’s problems would’ve been avoided had the DBs done a better job of tackling. T.J. Vasher (4-74-2, an average of 18.5 ypc), Erik Ezukanma (7-91-1, 13.0 ypc) and KeSean Carter (7-77-2, 11.0 ypc) all had big days downfield.

Herman then was asked a follow-up: What overall grade would he give the secondary’s performance against Tech (we gave ’em an F), and specifically whether today’s players are being taught to wrap up when making a tackle, not just delivering a hit.

“Oh yeah. We teach wrapping up,” he said. “You know, Chris Ash is one of the foremost experts in the country, if you ask anybody in our business, in terms of teaching tackling. So the teaching is not something I’m worried about. It’s the translation of that teaching without a spring practice, without a summer, with a very unique training camp — the translation of that teaching into game day. And we’ve got to get better at that.”

As for the grade, Herman gave the secondary a “C, maybe a C-minus.”

Texcetera: Herman was asked how many starters play on special teams — and whether the Horns need to play more of them. “Our punt team is pretty much all starters. I think it’s Chris Brown, Joseph Ossai, Roschon Johnson, Caden Sterns, Cade Brewer Reese Leitao, Josh Thompson and Tyler Owens, so our punt team is kind of a star-studded cast. Our kickoff coverage team, Brennan Eagles is on that team, we’ve got a few there. I would like to have our offensive and defensive starters hopefully start on only one of the big four special teams units.” … Herman pointed out that TCU quarterback Max Duggan is a runner, so it’ll present new challenges for the defense. … Will we see another Bijan Robinson hurdle? “Everything’s a first when you’re a true freshman. That was his first time trying to hurdle a guy in college. Didn’t go near as well as it normally went at Southpointe High School in Tucson, Arizona.”

Saturday’s game kicks off at 11 a.m. at Royal-Memorial Stadium. Texas has controlled the series with its old Southwest Conference rivals — 63-26-1 all-time — but TCU has dominated things in the Big 12. The Frogs are 6-2 against the Horns since joining the conference in 2012.