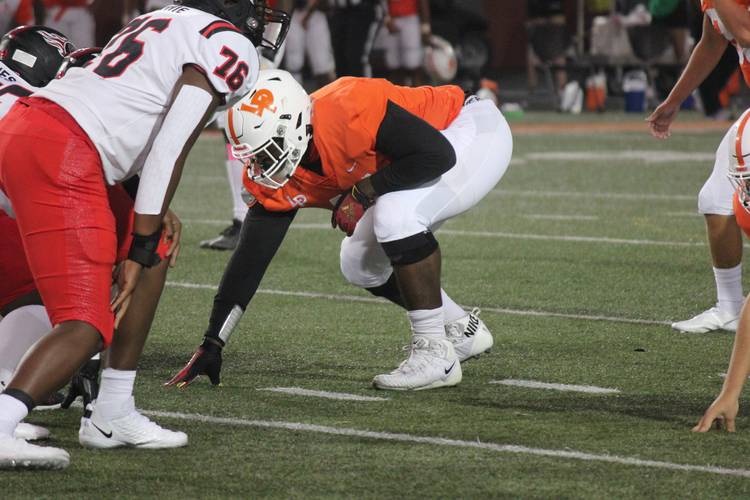 La Porte defensive tackle Albert Regis chose a future at Texas A&M over the Longhorns and 16 other offers. The three-star prospect announced his decision on Saturday afternoon while the Aggies were playing Florida at Kyle Field. The 6-1, 300-pound Regis was a top target of the rival Longhorns. Texas was considered the favorite to land Regis for much of the summer.

And it’s happen. Thank God for every blessing he has gave into my life, I’m proud to say I’m committed to Texas A&M❤️👍🏾 @CoachE_TAMU pic.twitter.com/jp0hthCPw8

Regis is an athletic big man with an offensive background. He was a first-team all-district selection at tight end as a junior. The one-time Minnesota commit narrowed his list to six in August. That group was comprised of Texas A&M, Texas, Arkansas, Ole Miss, Texas Tech and Houston. Regis is the 26th-ranked defensive tackle in the 2021 cycle, according to 247Sports composite rankings.

Texas’ 2021 recruiting class remains at 17 members. It ranks 17th in the nation and second in the Big 12, trailing Oklahoma. Tom Herman’s top remaining target along the defensive line is DeSoto defensive end Shemar Turner. Regis was on of just four defensive tackles in the entire 2021 cycle to hold an offer from the Longhorns with Garland Lakeview Centennial three-star Ikechukwu Iwunnah is the only other prospect at the position in Texas to hold an offer from Texas.

Regis is the 16th commitment for Texas A&M’s recruiting class, which ranks 16th in the nation and sixth in the SEC. He’s the second defensive tackle and fourth defensive lineman to choose the Aggies.

LIVE BLOG: No. 22 Texas vs Oklahoma