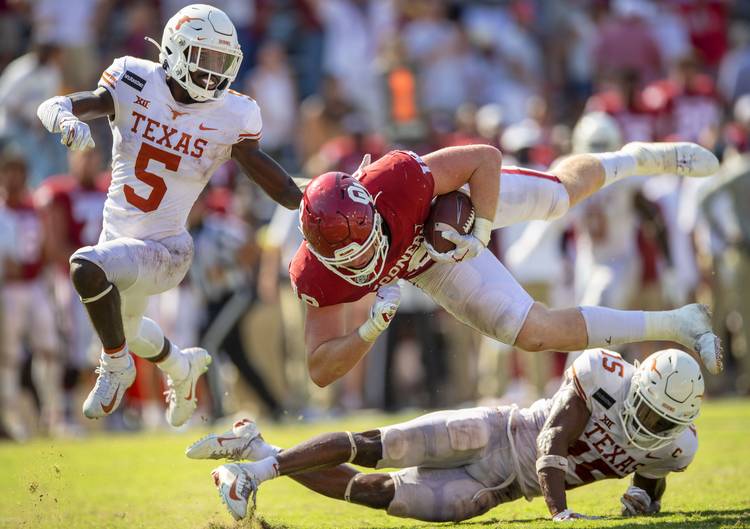 Oklahoma's Austin Stogner (18) is upended by Texas safety Chris Brown (15) at the Cotton Bowl in Dallas on Oct. 10, 2020. [RICARDO B. BRAZZIELL/AMERICAN-STATESMAN]

Due to this week’s bye, five starters on the Texas football team will get a few extra days to get healthy.

At his weekly press conference on Monday, UT coach Tom Herman issued a lengthy injury report. Herman said that senior safety Chris Brown suffered a shoulder sprain in UT’s 53-45 loss to Oklahoma on Saturday. Meanwhile, cornerback Josh Thompson sprained his ankle against the Sooners. Running back Roschon Johnson (shoulder) and Jake Smith (hamstring) also reaggravated previous injuries on Saturday. Finally, junior safety Caden Sterns was unavailable for the quadruple-overtime marathon in Dallas after dealing with turf toe in the leadup to the game.

“We are banged up but the bye week does come at a very opportune time for us,” Herman said.

Herman said that Brown was currently wearing a sling. He could start practicing by next week, though. Herman was hopeful that Johnson, Sterns and Thompson will return to practice by the end of this week. Smith, who was injured during the pregame warmups on Saturday, may also be ready to practice soon.

The second of UT’s byes is scheduled for this week. The Longhorns next host Baylor on Oct. 24.