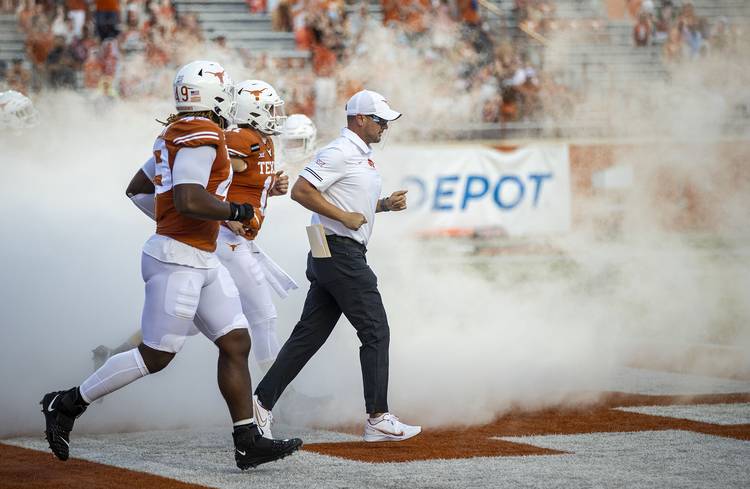 Texas Longhorns head coach Tom Herman takes the field with his team against UTEP Miners during an NCAA football game in Austin, Texas [RICARDO B. BRAZZIELL/AMERICAN-STATESMAN]

Maybe Saturday’s 27-16 win over Baylor is giving him a little more oomph this week. Herman was a bit more spry than he has been on recent Mondays, pushing back on a question about the Horns’ running game (see below), pushing back on a reporter’s multi-part question about the lack of pass rush and sacks (“You asked a lot of questions there … which one do you want me to answer?”), and jokingly interrupting ESPN’s Heather Dinich literally in the middle of her question about the OSU defense (“Hey! You’re not allowed on this call! This is for the local guys!”) when she appeared on screen during the Zoom.

Injury updates: All eyes are on Joseph Ossai. The jack end hurt his shoulder — “in layman’s terms, an anterior capsule sprain,” Herman said, checking his notes — late in the first half against Baylor. Sounds like he’s probable for Saturday, though “he’ll be braced up.” Herman said the hope is that Ossai is back at practice Tuesday or Wednesday.

State of the Horns: Where are the Longhorns at? How are they trending? Herman pointed to Saturday’s win, which came after the open week following those back-to-back losses to TCU and Oklahoma. The running game looked a little better. The offensive line didn’t hurt the team as much. Penalties were cut way down. There was only one sack, though, and there were more special teams issues.

Still, heading into Stillwater, Herman said he feels his team is on the right track. His bottom line: “We made a lot of strides in that bye week leading up to Baylor, and I expect us to continue on our trajectory north of improvement and development and hopefully give Oklahoma State our best shot. And if we give them our best shot and we don’t beat ourselves, much like we did not beat ourselves Saturday against Baylor, then we’ll have a chance to get a big-time win.”

And later: “We are a work in progress that I think everybody, at least in our family, sees the improvement week by week in some of those different areas that we’ve talked about.”

About that running game: After five games, Texas’ leading rusher is Sam Ehlinger, which sounds so 2017. The Statesman’s Brian Davis asked, basically, what’s up with that? Herman disagreed with the premise of the question:

“I don’t know that anybody ever said that we didn’t want our quarterback to be our leading rusher,” he said. “I think, again, a lot of things can be skewed by statistics. We play three tailbacks, so I think if you combine the tailback position, I would doubt that the quarterback position itself would be ahead of the tailback position in terms of total yards or yards per game, so I don’t think that’s a real, fair analysis of the run game to just say, oh your quarterback’s the leading rusher. Well, he’s the only one that’s played quarterback and there’s been three or four different guys that have carried the football multiple times for us out of the backfield. To be quite honest, I don’t think any of us said hey, we don’t want Sam to be our leading rusher, either. It’s just something that happens. He’s a good runner.”

Herman said he felt the running game “took a big step forward” against Baylor, when you take into account that if you added two backs’ totals together, they combined for more than 100 yards. “I don’t think there’s any cause for concern and I think we’re all on the right track when it comes to continuing to try to improve the run game.”

Keaontay Ingram has 51 carries for 245 yards. He hasn’t scored yet.

Roschon Johnson has 33 carries for 143 yards and 2 TDs. He was mostly kept out of the Baylor game.

Bijan Robinson, who got his first career start last week, has 26 carries for 123 yards. He’s scored once.

Texcetera: Vegas came out with updated odds to win the CFP championship today. The Horns are 150-to-1. And Ehlinger’s Heisman odds have dropped to 80-to-1, same as OU’s Spencer Rattler — right behind SMU’s Shane Buechele, who’s 66-to-1. … Senior center Derek Kerstetter has had back-to-back games with costly unnecessary roughness/late hit penalties, and he may soon be looking at Herman’s doghouse. “Once is an anomaly, twice is a coincidence, three times is a pattern,” he said. “Derek’s got two right now; I would say if he doesn’t learn now after the second one, we’re going to have a more stern conversation. … He knows. This is not something that Derek’s trying to do, it’s not something that Derek is defiant about, it’s not something that Derek is not extremely apologetic about.”

Saturday’s game at Boone Pickens Stadium kicks off at 3 p.m. It’ll be aired on Fox. Texas has lost its last two meetings there. The Horns are 3-2, 2-2 in the Big 12; the Cowboys are ranked No. 6 this week. The Horns are 3.5-point underdogs.