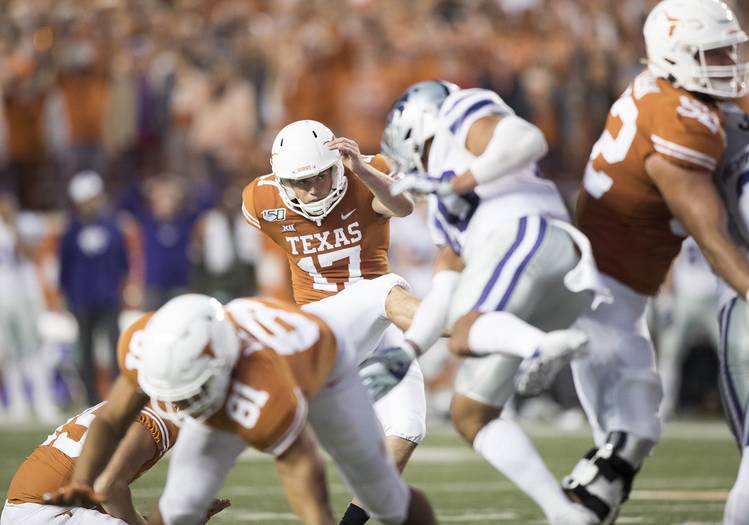 Those field goals, though, weren’t uncontested. First off, the Cowboys had 11 players on the field who were attempting to block those kicks. Oklahoma State also had a video board operator who attempted to ice the kicker.

On a 40-yard attempt at the end of the first half, Oklahoma State put up a series of yellow lines on a large video board behind the goalpost. As football fans know, the goalposts are also yellow.

It appeared that the video board just showed fans cheering when Dicker attempted a 20-yard kick at the beginning of the second quarter. After his two makes on Saturday, DIcker has made eight of this season’s 10 tries.

Oklahoma State tried to get Texas to miss a field goal by putting up yellow lines on the video board pic.twitter.com/2Kkb7vZs1F

At a press conference on Tuesday, UT coach Tom Herman was asked about Oklahoma State’s video board strategy. Herman said he has been in contact with the Big 12 administrators.

“I addressed it with Commissioner (Bob) Bowlsby and Ed Stewart, the associate commissioner for football, and they assured me that is not permissible by Big 12 standards. It has been addressed,” Herman said.

Herman did not elaborate on how the issue was handled by the Big 12. A conference spokesperson did not immediately respond to the American-Statesman’s request for comment.

Tom Herman: Sure, the OSU win was great, but Texas ‘immediately moved on to West Virginia’

On Second Thought Ep. 199: Voice of the Longhorns Craig Way on Texas-WVU, his beginnings in broadcasting