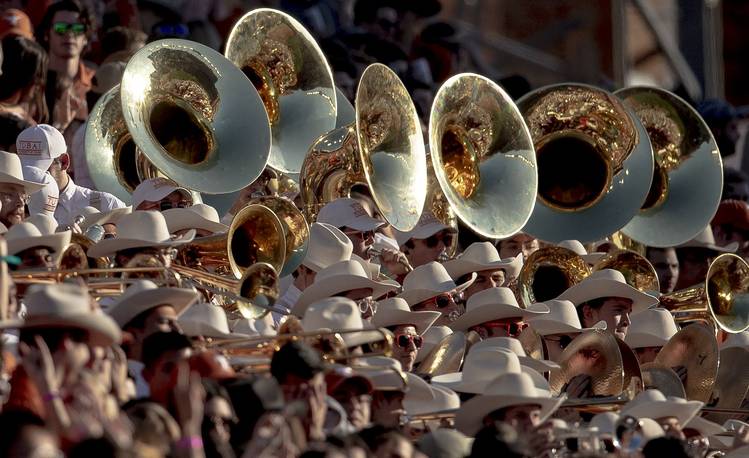 The University of Texas band will not perform during the Longhorns’ final two home games this season over an internal dispute about “The Eyes of Texas” school song.

The university had previously said the Longhorn band would not return until there was some final resolution. Enough band members objected to playing the song prior to the last home game against Baylor, so the band was essentially suspended.

A school spokesman said about 40% of band members have some kind of scholarship tied to being in the Longhorn band.

“There has been no change of status, and the university’s alma mater will continue to be played from loudspeakers at the game, not by the band,” Doug Dempster, dean of the College of Fine Arts, said in a statement provided to the American-Statesman. “In-person instruction concludes on Nov. 25, after which UT students are expected to be off campus.

“The band will also not perform at the final home football game the day after Thanksgiving on Nov. 27,” Dempster added.

UT President Jay Hartzell has already announced “The Eyes” will remain the school song. UT athletes asked school officials to do away with the song when its origins came to light this summer. “The Eyes” was first performed at minstrel shows in the early 1900s, and the music is set to “I’ve Been Working on the Railroad,” a historically Black work song.

Some UT athletes argued about standing on the field for the traditional post-game singing of “The Eyes.” The uproar that created drew national attention.

Over the last two weeks, UT athletes have stayed on the field of play and stood in unison while fans sing the song. Athletes are not required to sing the lyrics or even hold up the “Hook ’em” hand signal,” something UT athletes have done for decades.

Hartzell has is forming a committee to assemble a complete background on “The Eyes of Texas.” The group is expected to have its work done by early 2021.

Longhorn Confidential: What did No. 1 Texas learn about itself in its win over No. 3 Baylor?