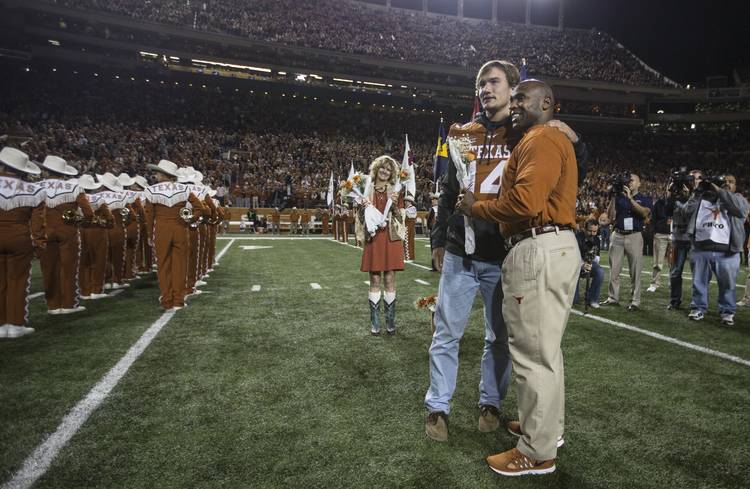 Kirk Bohls released this week’s nine things and one crazy prediction last night. A few were dedicated to the Longhorns. Here’s a sampling:

“He told me he’s a part-time youth minister at Bannockburn Baptist Church in Dripping Springs and is taking 16 hours in an accelerated master’s degree plan in finance. Says he might try coaching, real estate or an overseas mission trip. Ash said he still has a few after-effects from what he considers three concussions at Texas, “but nothing that blows up.” He said when he goes hunting, he can’t hit a dove flying left to right, “but right to left, I hit it every time.” As for the Longhorns, Ash said, “They’re really young. They’re not going to throw in the towel. They have a lot of potential. Give ’em a couple of years, and they’ll be great.”

On T.J. Ford and Fred Akers being voted into the Texas Sports Hall of Fame:

“At long last, former Longhorns football coach Fred Akers will be inducted into the Texas Sports Hall of Fame. He’ll take his rightful place in the Hall next February and join Texas basketball king T.J. Ford as well as Texas A&M pass rusher supreme Jacob Green. People forget Akers took Texas to the brink of two national championships. And without Ford, who got Texas to its only modern-day Final Four, Durant probably never considers Texas.”

On Kevin Durant’s donation to UT as a part of Texas’s $250 million contract with Nike:

“Kudos to Kevin Durant, who could have the most impact of any one-year student in UT history after giving $15 million to the school. The money probably will go toward endowing basketball scholarships. It takes $775,000 to endow a football scholarship, a little less for hoops.”