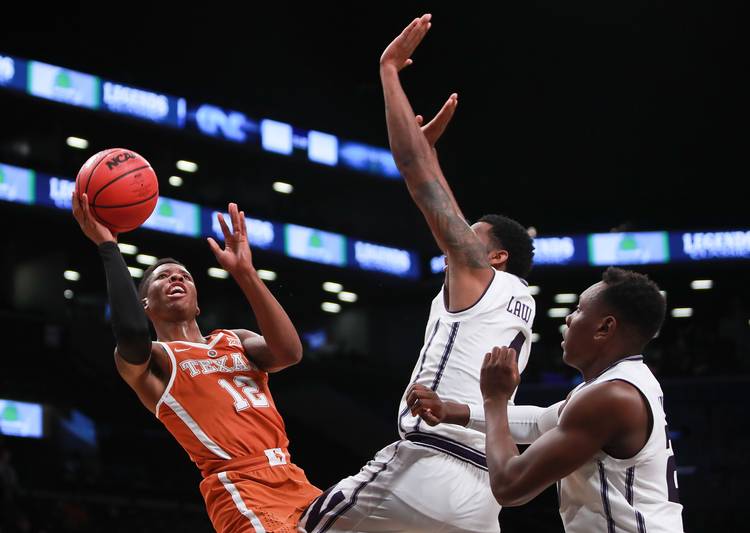 Kerwin Roach Jr. #12 of the Texas Longhorns puts up a shot over Vic Law #4 of the Northwestern Wildcats in the first half of the 2016 Legends Classic at Barclays Center on November 21, 2016 in the Brooklyn borough of New York City. (Photo by Michael Reaves/Getty Images)

NEW YORK (AP) — Bryant McIntosh had 20 points and five assists to lead Northwestern to a convincing 77-58 victory over No. 22 Texas on Monday night in the semifinals of the Legends Classic at Barclays Center.

The Wildcats (3-1) will play Notre Dame, which beat Colorado 89-81, in the championship game Tuesday night. The Longhorns (3-1) will face Colorado on Tuesday at 2:30 p.m. in the Legends Classic consolation game.

The Wildcats opened the second half on a 10-1 run to go up by 17 points and the Longhorns (3-1) were never closer than 14 points the rest of the way.

Scottie Lindsey had 16 points and Dererk Pardon had 10 points and 11 rebounds for Northwestern which took advantage of an out-of-synch Texas offense for the easy win.

Tevin Mack scored 18 points for the Longhorns, who finished with 14 turnovers and just seven assists. Texas didn’t help itself at the free throw line going 13 for 27.

The Longhorns shot .373 from the field and were outrebounded 40-31. The Wildcats doubled up the Longhorns in assists with 14.

Texas freshman James Banks was ejected nearly midway through the second half after committing a flagrant 2 foul.

Charlie Strong on LHN: ‘We deserve to come back’