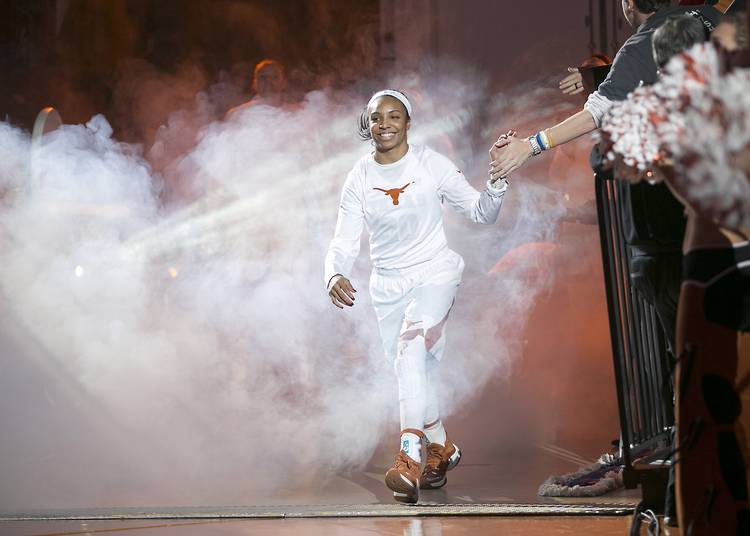 Texas' Brianna Taylor is introduced during pregame of their matchup against New Orleans at the Erwin Center in a non-conference basketball game Tuesday night December 20, 2016. RALPH BARRERA/AMERICAN-STATESMAN

University of Texas officials have decided to build a new on-campus basketball facility and probably do so in the parking lot south of the Mike A. Myers Stadium and Soccer Field, which is more easily accessible for the athletes and students, school President Gregory L. Fenves announced on Twitter late Friday afternoon.

Texas needs to replace the Erwin Center southeast of campus to make room for the expanding UT Dell Medical School. The 16,540-seat basketball arena has served as the home for the Longhorns men’s and women’s basketball teams since November 1977 and was used to host the UIL boys and girls basketball championships until they were moved to San Antonio in 2015.

“We are considering a plan to build the arena south of Mike A. Myers track stadium, though we have not yet determined the precise footprint, scope or cost of the facility,” Fenves said in a statement Friday.

The facility could be used to host other events and shows, the Statesman has learned.

Fenves said that Longhorns basketball coaches Shaka Smart and Karen Aston prefer an on-campus arena to make it easier for students to travel there from their dorms, classes and practices.

The Texas Athletics Master Plan released in 2016 identified several sites for a replacement for the 40-year-old Erwin Center and recommended it be built on campus. The plan listed a small parcel south of Myers Stadium as the preferred site. That parcel is part of the larger area now being reviewed by university leadership for the new basketball arena.

If Texas does build on that site, the two streets bordering it — Red River Street on the east and Robert Dedman Drive on the west — will be straightened.

“The campus master plan developed in 2012 called for the land under the Erwin Center to be used for future expansion of the Dell Medical School and the UT Health District,” Fenves said in a statement. “As we prepare for that, we will also ensure that our outstanding men’s and women’s basketball programs can continue to compete in a great arena.”

The arena has hosted everything from back-to-back Paul McCartney concerts to a 2011 Davis Cup tournament with Spain.

The Erwin Center, named for the late UT System Board of Regents power broker Frank Erwin, was built at a cost of $34 million, although it was subsequently renovated at $55 million with new seating and lighting plus 28 luxury suites.

By putting the new structure on campus, Fenves said, “it also makes the games more accessible to our student fans. By choosing a central location, we will make the experience of going to a game more intimate and exciting for all who participate.”

Though there was no official timetable for the change, one source told the American-Statesman last week that it could take almost as long as four years to complete the project from blueprint to bricks. Fenves declined to comment on the announcement.

Or report from 2014: Will parking lot become home to a new Texas basketball arena?

New University of Texas basketball arena: What people are saying