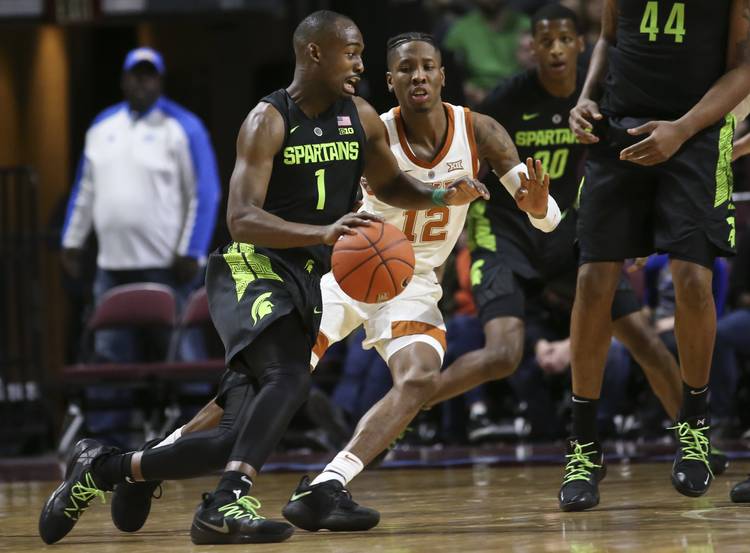 LAS VEGAS (AP)—Michigan State dug itself a deep hole early against the Texas men’s basketball team. But Joshua Langford, Cassius Winston and the rest of the Spartans did not panic.

Trailing by 19 points eight minutes into the Las Vegas Invitational championship game, the 11th-ranked Spartans (5-1) took the lead in the second half and pulled away for a 78-68 victory on Friday.

Langford scored 29 points, while Winston, who had 20 points and 10 assists, was named the tournament MVP.

“That start, we were just throwing it to them,” Michigan State coach Tom Izzo said. “We got to figure why (that happened). We learned a good lesson. What was good (was) to play against a team like that, Josh to play a second half like that and Cassius to play that good.”

Michigan State, which had the majority of the fan support, slowly built its lead to 71-59 with 3:32 remaining. The Spartans shot 55 percent from the field in the second half.

“Texas threw their punches and their jabs and we ate them,” Winston said. “They made their run and we said, `We are going to push it.’ We weren’t ready for that kind of pressure. Credit to the team, we just did a good job regrouping.”

Kerwin Roach II, the hero in Thursday’s upset of No. 7 North Carolina, led the Longhorns with 15 points and five assists. Dylan Osetkowski and Matt Coleman III each had 13 points.

“In the second half, we got away from who we want to be,” Texas coach Shaka Smart said. “We have to do a better job of who we want to be. When you get down, you play with a more ruthless type of approach. I thought Michigan State did a good job after we took that lead.”