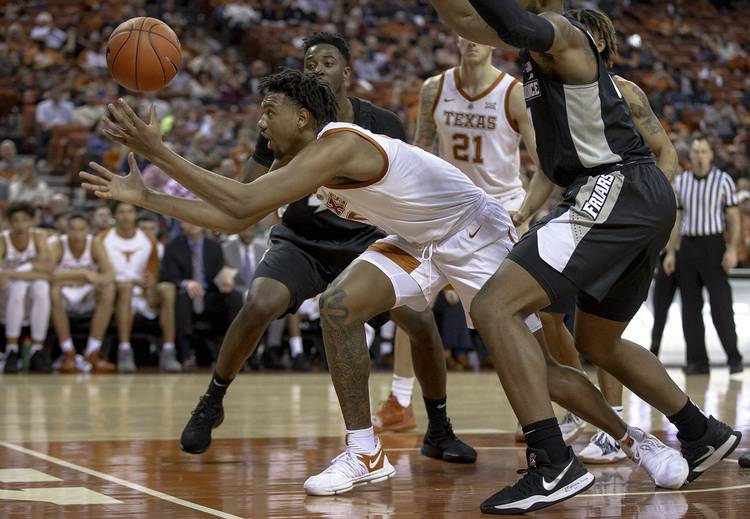 For two games, victories against Purdue and Grand Canyon, the Longhorns didn’t look like themselves.

On Friday, though, they lapsed into old habits, back into a team that can’t make much of anything.

Outshot by Providence overall, on 3-pointers, and at the free-throw line, the Longhorns lost 71-65 in front of 8,610 at the Erwin Center.

Alpha Diallo, the leading scorer this season for Providence (10-3), had a game-high 20 points. The Friars’ second-best scorer, A.J. Reeves, missed his third straight game with a foot injury.

Texas (7-4) was also without a key starter. Kerwin Roach II, the team’s leading scorer, missed the game with a stomach illness that prevented him from practicing on Wednesday and Thursday.

Matt Coleman and Jaxson Hayes led Texas with 13 points apiece. But Coleman converted just 5 of 16 shots and committed four of the Longhorns’ nine turnovers without making an assist. Hayes, meanwhile, spent chunks of the game on the bench in foul trouble.

“Free throw misses were critical,” Texas coach Shaka Smart said. “And I’d say when we go back and watch that tape, I would say 10 or 12 (missed) point blank shots, layups or close shots around the basket. You are not always gonna shoot the ball great from outside, but there are certain things under our control that we could be more consistent with.”

Texas shot worse in the second half (32.4 percent) than the first (44.4) after Providence switched to a zone defense that the Longhorns failed to smoothly navigate.

“Providence did a good job trying to take us out of our stuff,” Coleman said.

Losing Roach might have hurt, although he’s had more bad shooting games than good ones this season.

“It looked like Texas was a little bit out of sync without Roach,” Providence coach Ed Cooley said. “A lot of their offense runs through him.”

The best news for the Longhorns might have been the continued development of Hayes, the 6-foot-11 freshman. Hayes converted all six of his shots, mostly dunks, in 21 minutes. Hayes has hit 16 straight shots, and 20 of 21, the last four games.

Hayes’ foul trouble started with 9:18 left in the first half when he converted a pass from Eli Mitrou-Long into a dunk and reacted by saying, or doing, something that induced a technical foul call that counted as his second personal.

Hayes went to the bench with the score tied at 17, and Providence responded with a 10-2 run. He returned less than two minutes later in the half but picked up his third foul with 3:37 left and went back to the bench.

Hayes has yet to start a game this season but don’t be surprised if he receives a promotion. Jericho Sims, the struggling sophomore who starts ahead of Hayes, played just six minutes, finishing with no points and one rebound.

Smart did not commit to starting Hayes when asked about it after the game, but he did say “He’s playing great. He’s obviously playing better than any of our bigs.”

Despite their issues, the Longhorns had chances to win. Jase Febres missed an open 3-pointer that could have tied the game with 57 seconds left. Then Providence picked up a loose ball, missed one shot but scored when Nate Watson secured the rebound and made a layup with 32 seconds left for a five-point lead. After that, Isaiah Jackson stole the ball from Coleman.

“I really liked the grit of our team today,” Cooley said. “I liked our energy from start to finish. Our kids stayed resilient.”