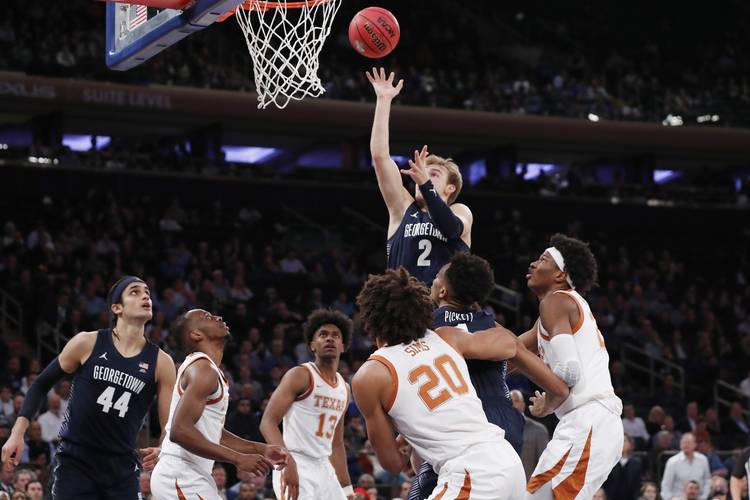 Patrick Ewing walked onto the Madison Square Garden court waving his arms and exhorting the crowd to cheer louder.

Some chanted for the Hoyas.

Maybe this win wasn’t as big for Ewing as beating the Pacers or the Bulls in playoff games. For a few moments for the former New York Knicks great, the Garden was home again.

“It felt like back in my Knick days,” Ewing said.

Mac McClung scored 19 points to help give Ewing another signature moment at Madison Square Garden, leading Georgetown to an 82-66 victory over No. 22 Texas on Thursday night.

The Hoyas (4-1) used a 12-0 run early in the second half that rallied the crowd and had “Let’s go Hoyas!” chants echoing throughout the arena. With his retired No. 33 New York Knicks jersey hanging in the rafters, Ewing helped orchestrate another wild one at his favorite arena.

The Hoyas are trying to make their first NCAA Tournament since 2015 and an early win over a Top 25 team could give that resume a boost.

Ewing did his best to pump up the fans and the Hoyas.

The Hoyas made the charge to open the second half kept the pressure on to advance to the title game of the four-team tournament.

Ewing had beckoned Qudus Wahab up from the bench for a late first-half pep talk. Ewing had a few things to say to his 6-foot-11 freshman center and they ended the conversation with a fist bump.

Ewing’s motivation eventually worked on his big man. Wahab had a thunderous dunk for a 54-52 lead and the active Hoyas defensive forced another turnover under Texas’ basket. Ewing waved on the fast-break like a third base coach sending a runner home, and Terrell Allen scored to get the Garden fans up and going wild for the momentum shift. Ewing pumped his fist and the Hoyas were pushing for an upset

His 7-foot frame impossible to miss even from the cheap seats, Ewing took a few strides onto the court to rally the Garden one more time.

“I just wanted to let my team know we have a lot of support from Georgetown alumni here and we want them to stand up and do it again tomorrow,” Ewing said.

That pose is a familiar sight around New York.

Ewing’s image is plastered inside and out at the Garden where he forged a Hall of Fame career. The most popular photo in the arena in one with his arms outstretched and his back toward the camera from the May 22, 1994, Game 7 win over the Chicago Bulls in the conference semis. His game-worn jersey and sneakers are encased in glass on the concourse. There’s photo of Ewing outside the Garden with his name in bold and the quote, “I always will be a Knick. And I will always be a New Yorker.”

The Knicks tweeted a photo montage of Ewing with the Hoyas and Knicks and wrote, “Pat comes full circle.”

New Yorkers and Georgetown fans haven’t forgotten the big man: Ewing walked off the court hugging and high-fiving fans on his way to the locker room.

Georgetown: Former Hoyas star Alonzo Mourning was at the game to watch them knock off a ranked team for the third time under Ewing. … Jamorko Pickett scored 15 points and James Akinjo had 14 for the Hoyas.

Texas: The Longhorns are sure to fall out of the Top 25 and now have to win a consolation game to salvage something out of their trip to New York. Matt Coleman made all six 3-pointers and scored 22 points for the Longhorns (4-1). Texas lost with former Longhorn and injured Nets center Kevin Durant watching courtside. Former Longhorn and Nets center Jarrett Allen also rooted on Texas from a courtside seat.

“They deserve a ton of credit, but for us, this is a really good game from the standpoint of having to look in the mirror and figure out who we need to be our best,” coach Shaka Smart said. “Honestly, we weren’t that good in the second half.”