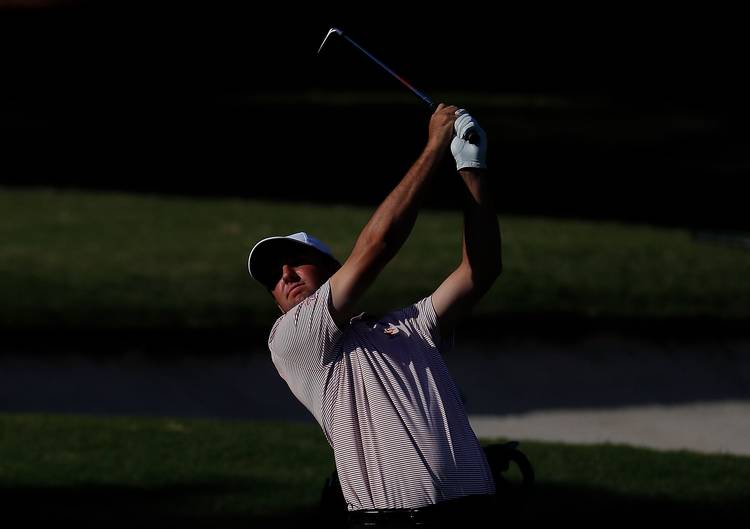 Scottie Scheffler of Texas plays a shot on the 13th hole during day 1 of the 2016 East Lake Cup at East Lake Golf Club on October 31, 2016 in Atlanta, Georgia. (Photo by Kevin C. Cox/Getty Images)

A day after Texas junior Scottie Scheffler shot a 66 to claim the individual title, the Longhorns fell in the match play round Tuesday at the East Lake Cup in Atlanta.

The Longhorns lost 3-2 to Illinois with only Doug Ghim and Gavin Hall taking victories.

Ghim defeated Nick Hardy 4 and 2 while Hall took a 2 and 1 win over Bryan Baumgarten.

Hall was down after the front nine but birdied on the 11th and 12th holes to take a 1-up lead. His eventual win tied the match at 1-1.

Ghim lost just two holes to Hardy and never trailed in the match. His victory put Texas up 2-1.

Michael Feagles bested Scheffler 3 and 1, taking a lead on the 10th hole and never relinquishing it. That result gave Illinois a 1-0 lead.

Edorado Lipparelli defeated Steven Chervony 2 and 1, tying the match at two wins apiece. Dylan Meyer sealed the win for Illinois as he defeated Taylor Funk 2 and 1.

The Longhorns will face Vanderbilt in the consolation match on Wednesday beginning at 10:05 a.m. Oregon and Illinois will meet in the championship match. The matches can be seen on the Golf Channel beginning at 2 p.m.

Longhorns in the NFL: Week 8