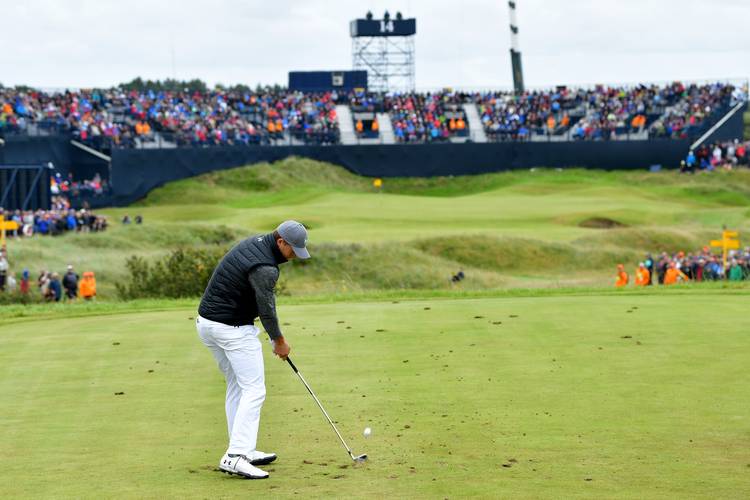 Jordan Spieth of the United States hits his tee shot on the 14th hole during the first round of the 146th Open Championship at Royal Birkdale on July 20, 2017 in Southport, England. (Photo by Stuart Franklin/Getty Images)

Four former Texas Longhorns completed the first round of The Open Championship on Thursday, with one coming away with a share of the lead at Royal Birkdale Golf Club in Southport, England.

Jordan Spieth shot 65, five shots under par, and shares the lead with Matt Kuchar and Brooks Koepka. Spieth shot 31 on the front nine before carding 34 on the back nine.

Spieth, who played at Texas in 2012, has two wins this season and already has two major championships, the Masters and U.S. Open, both in 2015. He had five birdies on the day, including two back-to-back to close out the front nine.

Shots like the one below helped him play a bogey-free round.

Two other former Longhorns are tied at 90th after shooting 3-over-par 73 in the first round. Brandon Stone, who as at Texas in 2013, and Dylan Frittelli, who was a Longhorn from 2009-2012, each had three birdies in the round.

Jhonattan Vegas is tied in 121st after shooting 75 in the first round. He started well, making par on the first three holes and then making back-to-back birdies. Things went south after that, as he had seven bogeys the rest of the way, including a double bogey on No. 11.