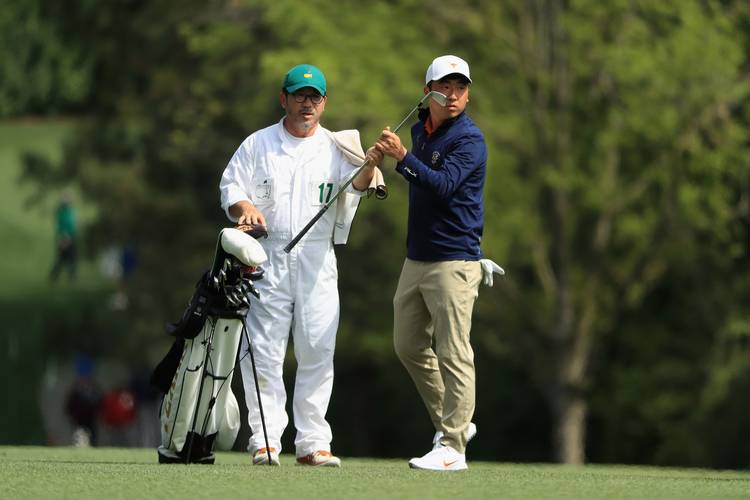 Longhorns senior Doug Ghim prepares to play a shot on the fifth hole during the final round of the Masters on Sunday. (Photo by Andrew Redington/Getty Images)

Not just in the Big 12 Tournament and the NCAA Championship, but here as well.

The Texas Longhorns senior golfer won low amateur, scored a field-best three eagles in the first two rounds and on Sunday found magic on the 18th hole when he holed out from the bunker for a birdie on the same play he eagled two days earlier.

While he was content with his 8-over-par result as the only amateur to make the cut at the Masters and he relished the opportunity to be interviewed in the Butler Cabin next to the champion, the 21-year-old from Arlington Heights, Ill., couldn’t help but peek ahead a bit.

“I know I could have done better,” said Ghim, who plans to turn pro after the U.S. Open in June. “This will be something I’ll never forget. I really hope I have a chance, if not a couple, to win here. I’ve always dreamed of being in the Butler Cabin because it’s a very exclusive bunch, so I’ll be seated next to greatness, and very motivating. But I want to be one chair over.”

Ghim might get there someday because he was undaunted in his first trip here and gained a wealth of knowledge about how tough Augusta National plays.

John Fields, his UT coach, who was on hand all week, won’t sell Ghim short.

Asked if Ghim could ever win a green jacket, Fields said: “I think so. Doug’s got great game and great belief. Like Jordan Spieth, Beau Hossler, Cody Gribble, Dylan Frittelli, there’s so much belief.”

Ghim’s three eagles were the best of any golfer in the 87-man field, and his holed-in approach shot on No. 18 on Friday was only the sixth eagle on the closing hole in Masters history. He tried hard Sunday but put two in the water on 13 and 15.

Jhonattan Vegas, who missed the cut in his two previous Masters appearances, was remarkably steady Sunday. He double-bogeyed the first hole but birdied Nos. 2, 11 and 15 to finish at 3 over with a 73 after his first round in the 60s and a 69 Friday. The 33-year-old former Longhorn had eight birdies and one bogey on the par-5 holes and played the par-3s in even par on the week.

Frittelli missed the cut, but that doesn’t mean he won’t be busy in the future. The 27-year-old South African plans to play in this week’s RBC Heritage at Harbour Town in Hilton Head, S.C., and then has even more important business.

He will return to Texas for another interview at the U.S. Embassy in an attempt to get his permanent resident card to stay in the States.

“It’s just so I can live and work in the U.S.,” Frittelli said. “Previously, I’ve had a visa, but this is more permanent. It’s pretty tough. The paperwork has taken 14 months so far.”