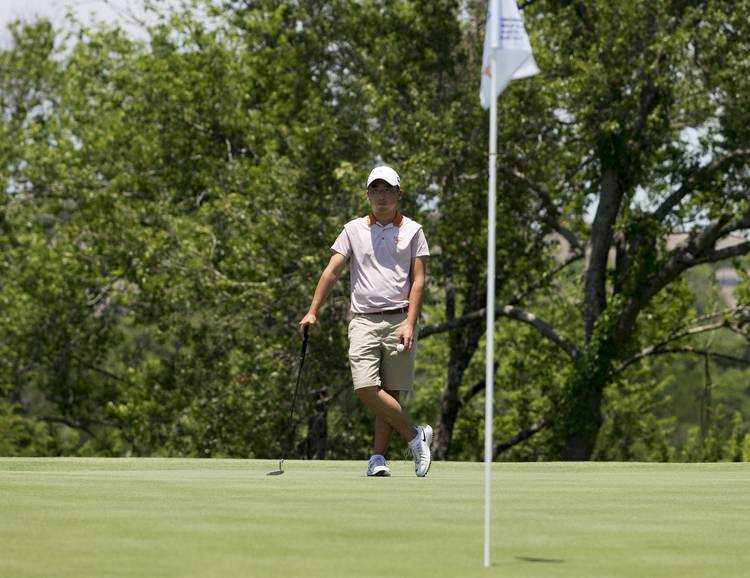 Texas senior golfer Doug Ghim and the Longhorns topped the leaderboard at the NCAA regional in Raleigh, N.C. to advance to the NCAA Championship Wednesday at the Lonnie Poole Gold Club.

Ghim shot a 66 in the final round of the regional to finish at 17 under par. He made 22 birdies in the tournament, best in the competition. Ghim made six birdies in seven holes during one stretch on the back nine.

The senior led Texas to finish at 813, 39 under par, 17 shots ahead of second place Duke. The result sends the Longhorns to the NCAA Championship for the 12th straight year.

Ghim’s victory comes after his win at the Big 12 Championship in late April. He’s won three competitions this season at Texas and has finished in the top-8 seven times.

Scottie Scheffler shot 68 to take fourth place at 11 under par. He made three birdies and shot par on 15 holes.

Steven Chervony tied for 16th at 209, 4 under par. Spencer Soosman totaled 211 to tie for 22nd. Drew Jones had the best round for the Longhorns after shooting in the 70s the first two rounds. He shot 66 to finish at 2 over par and tie for 63rd.

Through Tuesday, Ghim and Texas led. He shot 66 on Tuesday while teammate Scottie Scheffler shot 65.

Scheffler’s 65 was the low round for Texas in the second round and tied the senior’s season low. He made seven birdies in the round.

Ghim’s 66 followed up a 64 from the first round to have him sitting at 130, 12 under par. He led Benjamin Shipp of N.C. State by a stroke. Shipp finished the regional in third at 12 under par. Broc Everett of Augusta finished second at 14 under par, three shots back of Ghim.

Scheffler shot 69 in Monday’s first round.

Soosman and Chervony each shot 140 through two rounds to sit tied for 22nd at 2 under par before Wednesday’s final round.