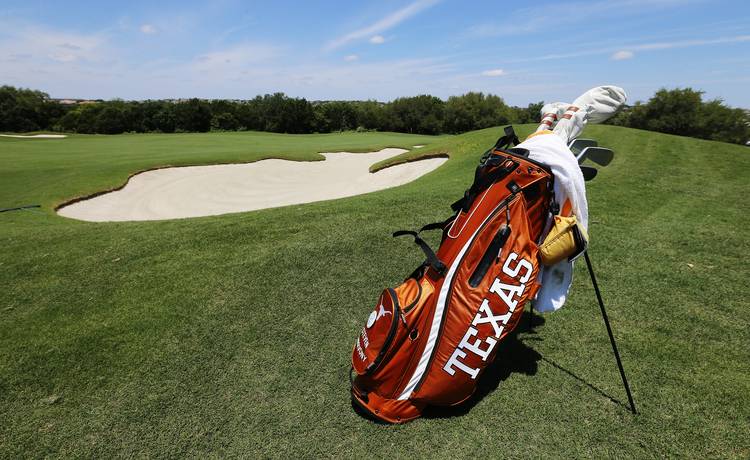 The bag of Texas' Steven Chervony sits on the 17th fairway during the NCAA men's golf regional at UT Golf Club, Monday, May 15, 2017. [Stephen Spillman/for Statesman]

Jake Shuman eagled the 18th hole to defeat Doug Ghim 1-up and clinch the match.

Ghim trailed early in the match, down four through the first six holes. The senior proceeded to win the 7th, 10th and 13th holes to pull within one. Ghim tied the match on the 16th but he eventually fell short.

“I’m so blessed and thankful for my coaching staff,” Ghim said. “They have really shown me what being a Longhorn is all about. It’s kind of hard to talk about now, but I’m just really proud to be a Longhorn.”

Alex Smalley defeated Scottie Scheffler 5 and 4 to give the Blue Devels a 1-0 lead. Texas will have to face life without Ghim and Scheffler next season.

“Doug and Scottie have been unbelievable for us,” said UT head coach John Fields. “Their work ethic, their desire, their belief. That is what stands out.”

Spencer Soosman tied the match after defeating Chandler Eaton 4 and 3.

Adrien Pendaries made it 2-1 after topping UT’s Drew Jones 4 and 3.

Steven Chervony took the second win of the day for Texas with a 3 and 2 victory over Evan Katz.

Golden: As Texas AD, Chris Del Conte has shown up with a ‘truckload of wake ’em up’