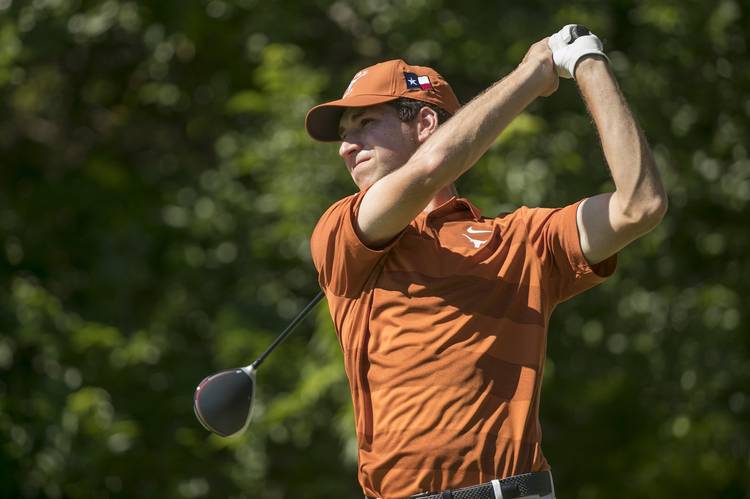 Steven Chervony of UT hits his tee shot on the tenth hole at the NCAA Austin Regional golf tournament at the University of Texas Golf Club on Monday May 13, 2019. [JAY JANNER/AMERICAN-STATESMAN]

The Texas men’s golf team won early in the day before winning a thrilling match with Oklahoma State in the semifinals of the NCAA Championships during match play in Fayetteville, Ark., on Tuesday.

Steven Chervony defeated Zach Bauchou in the last match to send the Longhorns to the final to face Stanford. Bauchou tied the match with two holes to play and won the second to last hole to take the lead, but Chervony answered by winning the 18th and 19th holes to take the win. Bauchou’s putt to halve the final hole rimmed out, giving the Longhorns the win.

Cole Hammer defeated the stroke play champion Matthew Wolff 4 and 3 after winning earlier in the day. Hammer finished 21 strokes behind Wolff during stroke play, but that didn’t matter as Hammer dominated in match play.

Spencer Soosman and Parker Coody each fell in their matches, setting up a tense dual between Chervony and Bauchou. Bauchou finished stroke play tied for eighth while Chervony tied for 47th.

The stroke play results didn’t matter, however, as the two were tied through 16 holes.

Earlier in the day, the Texas men’s golf team defeated Oklahoma 3-2 in the quarterfinals.

Parker Coody sealed the victory for the Longhorns after making birdie on the penultimate hole to take the lead. He halved the final hole to send the Longhorns through to face Oklahoma State.

Hammer had a dominating win over Patrick Welch, winning 7 and 5.

Chervony took the lead on the sixth hole, the No. 15 at Blessings Golf Club, in his match against Blaine Hale and never looked back. Chervony won the match 4 and 3 to set up Coody to close the deal.