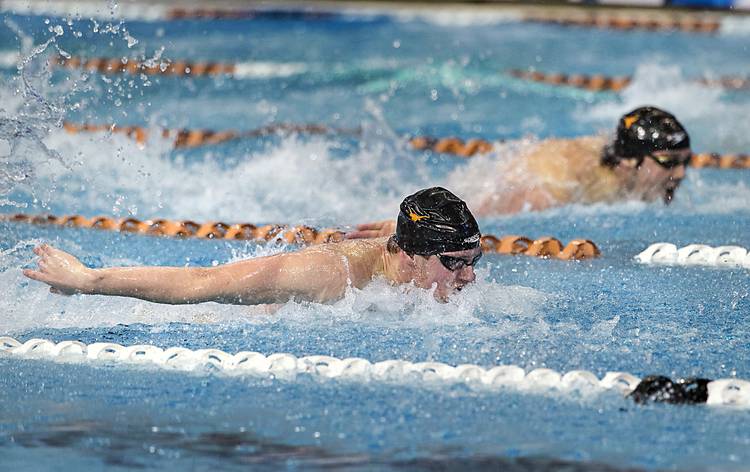 Both the Texas men’s and women’s swimming and diving teams started strong at the Big 12 Championships held at the Lee and Joe Jamail Texas Swimming Center on Wednesday.

The seventh-ranked Longhorns women’s team started the meet with a bang, breaking the school record for the 200-yard medley relay. Texas also took the top spot in the 800 freestyle relay on a successful first day.

Tasija Karosas, Jordan Surhoff, Mimi Schneider and Rebecca Millard teamed up to post a mark of 1 minute, 36.32 seconds in the 200 medley relay, taking down the school record which was set at the 2014 NCAA Championships. Lily Moldenhauer, Gretchen Jacques, Brynne Wong, and Ellen Lobb swam a 1:36.69 to set the previous mark.

Texas then finished the 800 freestyle relay in 7:00.41 to take first place. Madisyn Cox, Quinn Carrozza, Millard and Karosas teamed up for the fourth-fastest time in the country.

The Longhorns head into the second day of competition in first place as a team with 80 points. Kansas is in second with 68 points while Iowa State sits in third with 64.

The No. 1 men’s team won every event on the first night of the Big 12 Championships. Texas took wins in the 200 medley relay, the one-meter diving event and the 800 freestyle relay.

John Shebat, John Murray, Joseph Schooling and Brett Ringgold finished the 200-yard medley relay in 1 minute, 24.34 seconds to win the Big 12 title in the event for the 12th consecutive time.

Cory Bowersox added his second Big 12 championship in the one-meter finals with 397.00 points. Sean O’Brien was second with 392.80 points.

The Longhorns ended the night with a time of 6:15.48 in the 800 freestyle relay. Jack Conger, Townley Haas, Clark Smith and Joseph Schooling teamed up for the win. It was the fourth best time in the nation this season.

West Virginia leads in overall scoring with 130 points, thanks in large part to four finalists in the men’s diving event finals. Texas has 117 points while TCU is in third place with 92 points.

The second day of competition begins at 10 a.m. on Thursday.