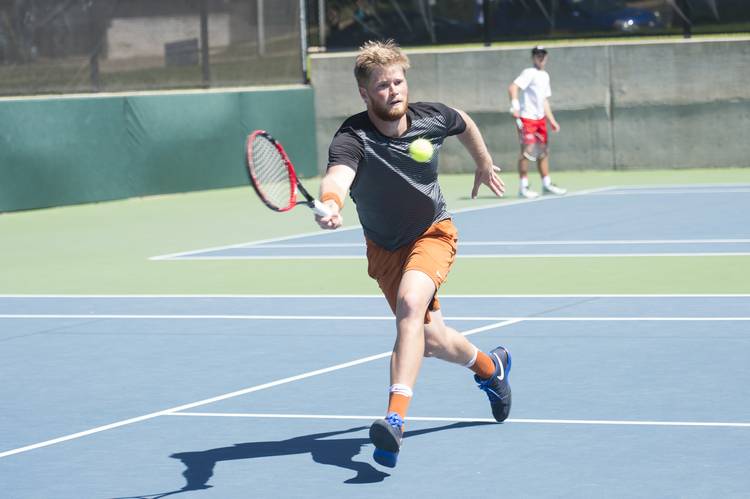 Texas freshman Christian Sigsgaard lunges to return a shot. He'll compete for UT in this weekend's opening rounds of the NCAA tournament, which Texas is hosting. (Photo courtesy of Texas Athletics)

The No. 10 Texas Longhorns fell short of the NCAA final four in men’s tennis as they dropped their quarterfinal match with No. 2 Virginia 4-1 Saturday in Athens, Ga.

Christian Sigsgaard took the only victory for Texas as he won in straight sets over Alexander Ritschard. The 7-5, 6-3 win was another against a top-100 opponent for the Big 12 freshman of the year and made it 3-1.

“I’m proud of the team,” UT head coach Michael Center said. “We were fighting and hanging in there, but Virginia is awfully good. I have to give Virginia credit because they were just too good today.”

Carl Soderlund topped Yuya Ito 6-2, 6-1 to put Virginia one win away from clinching the match.

After Sigsgaard’s win, J.C. Aragone closed out the match with a 6-2, 7-6 (3) win over Telles at fifth singles. Telles held a 4-1 lead in the second set, but Aragone forced a tiebreaker and eventually took the match.

Sigsgaard, Harrison Scott and Ito will compete in the NCAA Championship singles draw starting May 24.