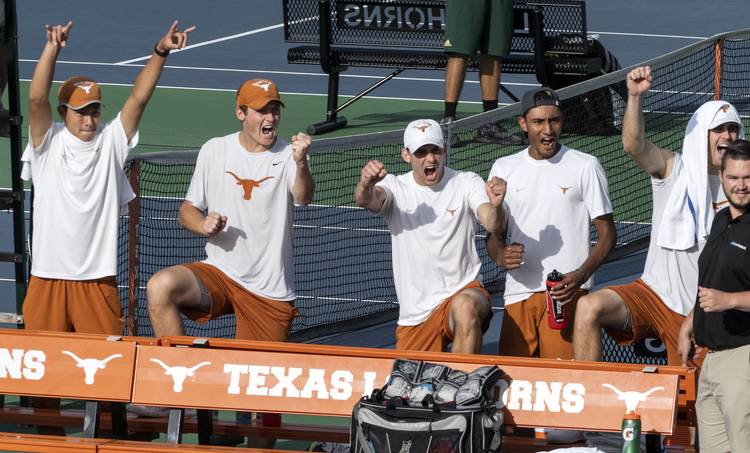 The postseason run continues as the No. 2 Texas men’s tennis team defeated No. 3 Florida to reach the NCAA Championship final Saturday in Orlando, Fla.

It’s the second time in program history that the Longhorns have reached the championship final. The last time was in 2008.

Leonardo Telles sealed the win with a 6-4, 7-5 defeat of Johannes Ingildsen.

“That’s like the third or fourth time he’s done that for us this year,” interim head coach Bruce Berque said. “How he stepped up, attacked and played big in a big moment was pretty impressive. I couldn’t be happier for him and the seniors and the whole team.”

The Longhorns had to fight hard early for the doubles point. Christian Sigsgaard and Harrrison Scott played a lot of deuce points before controlling their match, eventually winning 6-3. After Florida tied doubles and took a 6-5 lead over Yuya Ito and Chih Chi Huang, the UT duo fought back to win in a tiebreaker 7-6 (1) and take the first point of the match.

“I was really proud of the way the guys stepped up in doubles, especially at No. 3 doubles,” Berque said. “It was an up and down seesaw match, but at the end they really stepped up and played aggressive tennis.”

Rodrigo Banzer made it look as if UT would take an easy win when he took a 6-2, 6-4 win over McClain Kessler.

The Gators fought back, though, taking two straight contests to pull within a point.

Texas will face No. 4 Wake Forest in the NCAA championship match Sunday at 2 p.m.